Bangladesh Register Their Highest Ever ODI Victory by Runs, Defeat Zimbabwe by 169 Runs in 1st ODI 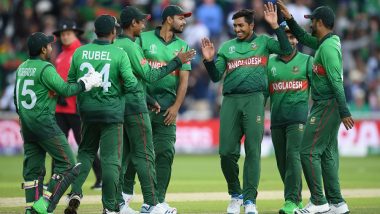 Bangladesh put up a thumping performance against Zimbabwe in the first ODI of the series at the Sylhet International Cricket Stadium and registered a historic win. They defeated the visitors by a comprehensive margin on 169 runs, their highest ever ODI victory ever by runs. Opener Liton Das was the stand-out performers for the Bangla Tigers as he mustered a scintillating ton and guided his side to a mammoth total of 321-6. In reply, none of the Zimbabwe batsmen were able to put up a fight and got bundled out for 152 runs. Mohammad Saifuddin was the pick of the bowlers with three wickets. Bangladesh vs Zimbabwe Live Cricket Score 1st ODI Match.

In 2018, Bangladesh defeated Sri Lanka by 163 runs which became their biggest ODI victory in terms of runs. However, the record was crashed inside two years. Also, this match was the comeback game for skipper Mashrafe Mortaza which eventually proved out to be a special one. In fact, Mortaza himself scalped two crucial wickets in his spell and went to the prestigious landmark of 700 career wickets. For Zimbabwe, debutant Wesley Madhevere tried to show some resilience and scored 35 runs. Other than him, Tinotenda Mutombodzi scored 24 runs.

That is their biggest ODI victory ever by runs 👏 #BANvZIM pic.twitter.com/GkPcl6ZnWL

With this triumph, Mashrafe Mortaza and Co have taken a 1-0 lead in the three-match series. Momentum is certainly on their side and riding on that, they will aim to clinch the second ODI too in order to seal the series. On the other hand, the next game will be a do-or-die encounter for Chamu Chibhabha-led side and they must leave no stones unturned in winning that game. BAN vs ZIM 2nd ODI will be played on March 3 at the same venue i.e. Sylhet International Cricket Stadium.

(The above story first appeared on LatestLY on Mar 01, 2020 09:12 PM IST. For more news and updates on politics, world, sports, entertainment and lifestyle, log on to our website latestly.com).