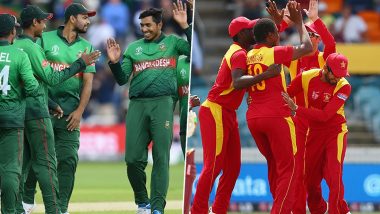 Bangladesh (BAN) will take on Zimbabwe (ZIM) in the second game of the three-match One-Day series. BAN vs ZIM 2nd ODI match will be played at the Sylhet International Cricket Stadium, Sylhet on March 3, 2020 (Tuesday). The hosts were dominant in the opening match of the tournament as they brushed aside Zimbabwe by 169 runs and took a 1-0 lead in the series. Meanwhile, fans searching for tips to create Dream11 Fantasy Team for Bangladesh vs Zimbabwe second One-Day international encounter can scroll down below for more details. Bangladesh Register Their Highest Ever ODI Victory by Runs, Defeat Zimbabwe by 169 Runs in 1st ODI.

Bangladesh were brilliant in the opening game of the series as they registered their biggest wins in terms of run in One Day internationals. Liton Das was outstanding in the match as he scored his second century in the fifty-over format. This innings helped the hosts to put on a mammoth total of 321 runs on the board. Zimbabwe’s chase never got going as a disciplined Bangladesh bowling attack didn’t give much away. Mohammad Saifuddin was the star with the ball as he took three wickets while Mustafizur Rahman and Captain Mashrafe Mortaza bagged a brace each. Mashrafe Mortaza Extends Support for Shakib Al Hasan, Says ‘He Will Lead Us to 2023 World Cup’.

Bangladesh vs Zimbabwe, 2nd ODI 2020, Dream11 Team Prediction: Wicket-Keepers – Liton Das (BAN) and Mushfiqur Rahim (BAN) should be your wicket-keepers for this clash.

Bangladesh vs Zimbabwe, 2nd ODI 2020, Dream11 Team Prediction: Batsmen – Tamim Iqbal (BAN) should be your captain. Mohammad Mithun (BAN) and Brendan Taylor (BAN) must be the other batsmen in your team.

Bangladesh vs Zimbabwe, 2nd ODI 2020, Dream11 Team Prediction: All-Rounders – Sean Williams (ZIM) should be your vice-captain. Mohammad Saifuddin (BAN) and Wesley Madhevere (ZIM) should get a place in your team.

Bangladesh will look to carry this momentum in the second game and will look to seal the series with a win. Zimbabwe missed some key players such as Sean Williams, Craig Ervine in the game and the former can make a comeback in the 2nd ODI but the latter still remains a doubt for the clash.

(The above story first appeared on LatestLY on Mar 02, 2020 06:31 PM IST. For more news and updates on politics, world, sports, entertainment and lifestyle, log on to our website latestly.com).