BCCI to Hold Camp for Virat Kohli and Co in Dubai Before IPL 2020: Report 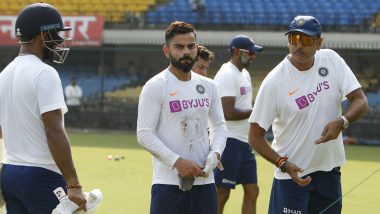 The Board of Control for Cricket in India (BCCI) is reportedly mulling about conducting a camp for contracted Indian cricket team players in Dubai before the Indian Premier League (IPL) 2020. As per reports, United Arab Emirates (UAE) is still in reckoning to host the IPL 2020 if the coronavirus crisis in Mumbai doesn’t improve. BCCI is yet to issue Standard Operating Procedures for the resumption of cricket and after July 17 things are expected to become clear. KL Rahul Is Missing Cricket, Indian Batsman’s Latest Social Media Post Is All About His Love for the Game.

If BCCI goes ahead with IPL 2020, then players will have to join their franchises three weeks in advance. Holding the national camp and IPL 2020 in Dubai will make it easy for players to join their respective franchise camps.

“By the looks of it, UAE will mostly host the IPL, unless the situation improves dramatically in Mumbai. So the camp there makes more sense in every way possible. Once the IPL venue is decided, then expect things to move forward quickly,” sources were quoted as saying by The New Indian Express. BCCI Appoint Hemang Amin as Interim CEO After Rahul Johri's Resignation

BCCI is banking on the cancellation of ICC T20 World Cup 2020 scheduled to be held in October-November in Australia. If the tournament gets cancelled, which is likely, then BCCI will have a window to conduct IPL 2020. Indian players have been out of action since their tour of New Zealand which ended in early March.

(The above story first appeared on LatestLY on Jul 15, 2020 01:02 PM IST. For more news and updates on politics, world, sports, entertainment and lifestyle, log on to our website latestly.com).