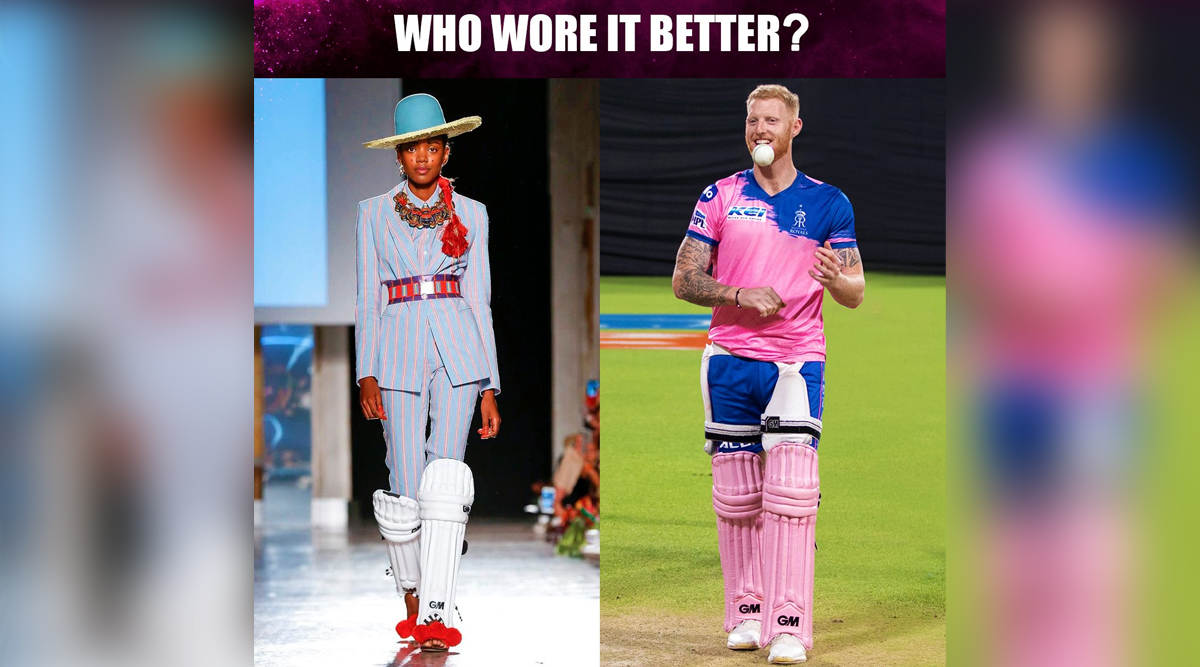 Ahead of the 2020 edition of the Indian Premier League (IPL), social-media handles of all the teams have been quite and so is that of Rajasthan Royals (RR). The franchise recently took to their official Twitter handle and shared a merged picture of England all-rounder Ben Stokes and a model, whose costume contained added some Gunn & Moore pads - designed by  Italian fashion designer Stella Jean for Spring-Summer 2020 Milan Collection. RR also asked the fans to retweet the post in order to make Stokes the next show-stopper. Well, the picture didn’t fail in grabbing the attention of the netizens as the comment section of the pic was filled with hilarious messages and memes. Rajasthan Royals Trolls Royal Challengers Bangalore for Using Their Wrong Logo (See Post).

Rajasthan Royals specially asked Stokes’ England teammate Stuart Broad to give his pick. The England pacer also didn’t take long in expressing his views. Other netizens also joined in the fun and picked one from Stokes and Jean. Majority of the votes went to the talismanic England cricketer which few people came up with some funny replies too. Let’s check out the reactions below. IPL 2020 Schedule in IST: Full Timetable of Indian Premier League Season 13.

I must admit- I like the batting in a wide brim sun hat option....

Us too! As long as it’s Broad enough.🤠 pic.twitter.com/0N9hQnCQ29

Support for Stella Jean Too!!

Of course the lady on the ramp 😆🤪

Of course the lady on the ramp 😆🤪

Speaking of Ben Stokes, the star all-rounder was last seen in action during the recently concluded T20I series against South Africa. He has been enjoying a great run in international cricket and Rajasthan-based team will certainly want him to replicate his heroics in the gala tournament too. The 2020 edition of the IPL will get underway on March 29. While Royals’ first fixture will be against Chennai Super Kings on April 5 at the M.A.Chidambaram Stadium in Chennai.