Big Bash League (BBL) side Brisbane Heat have shocked its legion of fans and millions of cricket followers in the country by confirming that they would not offer a fresh contract to their iconic batter Chris Lynn, who was with them for more than a decade. 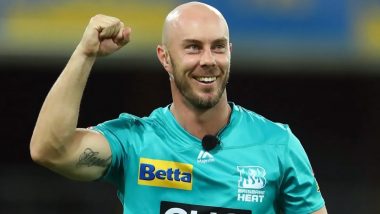 Brisbane, May 11: Big Bash League (BBL) side Brisbane Heat have shocked its legion of fans and millions of cricket followers in the country by confirming that they would not offer a fresh contract to their iconic batter Chris Lynn, who was with them for more than a decade. "After more than a decade, the curtain has come down on the Chris Lynn era with the Brisbane Heat. The Heat today (Wednesday) have confirmed that a new deal would not be offered to the 32-year-old batsman for BBL-12," said Brisbane Heat in a statement. Virat Kohli Hopeful of AB de Villiers' Return to RCB Next Year.

Lynn, who has played 18 T20Is and four ODIs, scored a total of 3,005 BBL runs at a strike-rate of 148.83 and average of 34.54, with one century to his name. He also played three games for the Heat at the now defunct Champions League T20 tournament in 2013, said a report in cricket.com.au. Lynn has also been a part of several Indian Premier League franchises such as Deccan Chargers, Kolkata Knight Riders, Mumbai Indians and Sunrisers Hyderabad, at different times of his career.

Queensland Cricket and Brisbane Heat CEO Terry Svenson said the decision had only been made after all parties had taken a suitable period to reflect on their options following the end of BBL-11 where the Heat finished seventh. "It's not a decision that has come easily to the Heat by any means," he said. "Chris Lynn and his feats have made an indelible impression on the club, and his efforts over more than a decade can rightly be said to have had an enormously positive effect on cricket. We should gratefully acknowledge the influence he has had on a generation of kids who have grown up thrilled by his batting exploits.

"His appearance in a teal jumper each year would no doubt be linked by many households to the onset of their holidays, with the BBL being such an integral part of summer holidays. The Heat wish him nothing but the best for the future as he transitions into another phase of his career and thank him wholeheartedly for his commitment to the game in Queensland," Svenson said. Queensland Cricket's Recruitment and Retention Committee Chair and Australian legend, Ian Healy, said the decision marked the start of the next stage of the club's evolution. Devon Conway, CSK Batter, Reveals Emotional Struggles Following a Freak Injury During 2021 T20 World Cup.

"Chris Lynn will be missed by thousands, however, the decision we have made as a club is about building on the legacy that he leaves as a foundation player, captain and ambassador for the Heat," said former Test great Healy. "We thank Heat members, fans, corporate partners and sponsors for their wholehearted support of 'Lynny' and recognising his great performances over the past 11 seasons. He holds a very special place in our history," Healy said.

As a teenager Lynn played T20 for Queensland in the original Big Bash and was among the early signings when the Brisbane Heat squad was assembled for BBL-01. He played in the Heat's BBL-02 championship team and went on to to register 102 games for the Heat. He became the first male Heat player to register 100 games for the club. He is the all-time record-holder of the most sixes in BBL history at 180, with replays of the night he hit a six out of the Gabba among the most viewed pieces of BBL footage ever. A report in cricket.com.au said that Lynn "is understood to be weighing up his options whether to find a new BBL club or seek to ply his trade abroad".

(The above story first appeared on LatestLY on May 11, 2022 01:22 PM IST. For more news and updates on politics, world, sports, entertainment and lifestyle, log on to our website latestly.com).