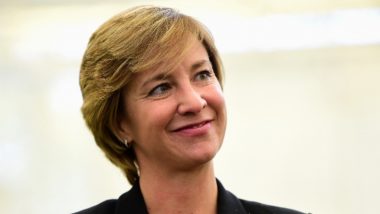 Former England captain Clare Connor is set to become the first-ever female president of the Marylebone Cricket Club (MCC). The 43-year-old will take over from Kumar Sangakkara – who is on his second term as the MCC chief – from October 1, 2021, after her nomination was approved by the members. Connor will thus become the first female president of the MCC in its 233-year history. She is currently serving in her capacity as the England and Wales Cricket Board‘s managing director of women’s cricket and will take over the role from October next year. ECB Confirms Zero Positive Cases of COVID-19 Among Players, Support Staff After Testing 702 Individuals.

"I am deeply honoured to be named the next president of MCC," said Connor, who was nominated by Sangakkara. Sri Lanka is also the first overseas president of the club. "Cricket has enriched my life so deeply already, and now it hands me this wonderful privilege. We often need to look back to see how far we've come. I made my first visit to Lord's as a starry-eyed, cricket-obsessed nine-year-old girl at a time when women were not welcome in the Long Room. Times have changed,” she added.

"Now I find myself entrusted with this remarkable opportunity - the opportunity to play a part in helping MCC, cricket's most influential club, to thrive and grow in an even more modern and inclusive future."

Connor, who represented England in 16 Tests, 93 WODIs and two WT20Is, was the first England women’s skipper to captain the team to their first series win n 2005 ending a 42-year drought. She was made an honorary life member of the club in 2009 and has also been ICC Women’s Cricket Committee since 2011.

Sangakkara, first non-British president of MCC is currently on his second term as the chief after the members invited him to extend for another year due to the coronavirus pandemic affecting sports and the world of cricket. "I am thrilled that Clare has accepted the invitation to become the next president of MCC," he said.

"The club has a significant role to play in cricket's global appeal and with her influence, I am sure she will make a considerable contribution to MCC. With the extended lead-in time until she takes office, she will have an important part to play as president-designate."

(The above story first appeared on LatestLY on Jun 24, 2020 10:56 PM IST. For more news and updates on politics, world, sports, entertainment and lifestyle, log on to our website latestly.com).