Coffee Proved Too Costly for Me, I Drink Green Tea, Says Hardik Pandya in Instagram Live Chat with Dinesh Karthik

Pandya was caught in a maelstrom of controversy in early 2019 due to his remarks on the chat show in which he had appeared with teammate KL Rahul. It led to both being briefly suspended from the Indian team. 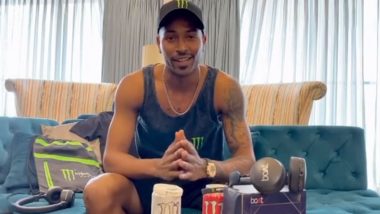 New Delhi, April 26: India all-rounder Hardik Pandya has joked that a cup of coffee proved too costly for him and he now drinks green tea instead in an Instagram live chat with wicket-keeper Dinesh Karthik. Pandya was referring to the controversy he landed in due to his comments on the television show Koffee With Karan in early 2019.

"I don't drink coffee, I drink green tea instead. I drank coffee only once and proved to be too expensive for me. I can bet that Starbucks would not have such an expensive coffee. Since then I stay away from coffee," he said in the live chat which also featured his brother and fellow all-rounder Krunal. Playing IPL Behind Closed Doors a Smarter Option: Mumbai Indians All-Rounder Hardik Pandya.

Pandya was caught in a maelstrom of controversy in early 2019 due to his remarks on the chat show in which he had appeared with teammate KL Rahul. It led to both being briefly suspended from the Indian team.

Pandya has since got engaged and while his return to the Indian team has been hampered by injuries and the ongoing coronavirus lockdown, he is expected to play for the team at the T20 World Cup later in the year should it go through.

He also said that he would be okay with the 2020 season of the Indian Premier League (IPL) being played behind closed doors. The season has been postponed after the Indian government extended the ongoing lockdown in the country to May 3 amid the coronavirus pandemic.  Hardik Pandya Owns These Expensive Items Including Patek Philippe Rose Gold Nautilus Watch, Lamborghini Huracan Evo & Louis Vuitton Paris Shirt!

"It will be different. We are used to playing in front of them as the feeling of competition comes with the crowd," said Pandya in an Instagram live chat with Dinesh Karthik.

"I've played in the Ranji Trophy without crowds, and it feels different. To be honest, if that [IPL behind closed doors] happens, it will be a smarter option. At least people will be entertained at home," he said.

(The above story first appeared on LatestLY on Apr 26, 2020 11:09 AM IST. For more news and updates on politics, world, sports, entertainment and lifestyle, log on to our website latestly.com).