Jamaica Tallawahs needed a special effort to win the game and especially after the team was struggling at 41-5 in the seventh over. But in came Andre and the ball kept going out of the ground as Russell completed a 40 ball hundred to guide his team home. 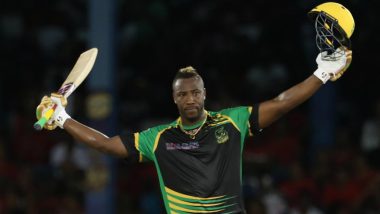 Andre Russell Took a Hat-trick, Pulled off a Blinder and Scored a 49 Ball 121 to Take Jamaica Tallawahs to Victory Against Trinbago Knight Riders in Caribbean Premier League 2018 | (Photo Credits: Twitter@CricketAus)

Most players in the world would be happy to take a hat-trick, take A a blinder of a catch or score a century in a T20 match. Andre Russell did all of that on his own in the match against Trinbago Knight Riders on Friday, August 10. Russell, who is also the captain of the Jamaica Tallawahs, ensured that his team wins its opening encounter in the Caribbean Premier League 2018, almost single-handedly.

Andre Russell, who is playing in the CPL after a 12-month ban for doping rule violation, played as if he was never away from the League. He put the Trinbago Knight Riders in to bat, after winning the toss. It was in the 11th over that he gave a sign of things to come, if the dots could be connected looking forward. He took a stunning catch at extra cover to get rid of the dangerous Chris Lynn, who was batting on 46 off only 27 balls. Follow the Caribbean Premier League 2018 live streaming here.

Russell decided to bowl the last over after Kemar Roach leaked 30 runs of the penultimate over. Russell got hit for a boundary on the first ball by Brendon McCullum but got the wickets of McCullum, Darren Bravo and Denesh Ramdin in the next three balls to complete his hat-trick. But not before the Trinbago Knight Riders had managed the highest team total of 223-6 in the history of CPL.

Jamaica Tallawahs needed a special effort to win the game and especially after the team was struggling at 41-5 in the seventh over. But in came Andre and the ball kept going out of the ground as Russell completed a 40 ball hundred. Watch the video highlights of his explosive innings below:

Russell took his team home hammering a 49-ball 121 after taking 3/38. Even more, he was dropped off the first ball he faced and went on to hit 13 sixes! Needless to say, Man of the Match performance, and a feat to remember for years to come.

(The above story first appeared on LatestLY on Aug 11, 2018 01:02 PM IST. For more news and updates on politics, world, sports, entertainment and lifestyle, log on to our website latestly.com).