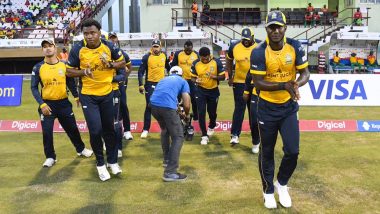 The 7th edition of Caribbean Premier League is an exciting cricket tournament to look out for.  CPL 2019 consists of six teams who will be battling to outplay each other to bag CPL 2019 title. Defending champions Trinbago Knight Riders will be eyeing third consecutive title with CPL 2019. The nail-biting T2O matches will be played from September 5 to October 13, 2019. If you are looking for CPL 2019 teams, full schedule, matches and venue details, you are on the right page. Other than Trinbago Knight Riders, other five teams participating in the tournament are Guyana Amazon Warriors, Barbados Tridents, Jamaica Tallawahs, St Kitts and Nevis Patriots and St Lucia Zouks. You can download the full schedule of CPL 2019 here for free.

A total of 34 matches will be played at seven venues during CPL 2019. The venues of the matches are Queen's Park Oval in Port of Spain (Trinidad), Providence Stadium in Guyana, Warner Park in Basseterre (St Kitts), Sabina Park in Kingston (Jamaica), Daren Sammy National Cricket Stadium (Gros Islet, St Lucia), Kensington Oval in Bridgetown (Barbados), Brian Lara Stadium in Tarouba (Trinidad). The group stage will end on October 4 post which the playoffs matches will be played. Each team will be awarded two points for winning a match, and in case of a tie, one point will be given to each team.

Below is the full schedule of Caribbean Premier League 2019.

Below are the full squads of all the six teams participating in CPL 2019 tournament.

The Kieron Pollard led Trinbago Knight Riders have been dominating the tournament from the last two editions. In CPL 2018, Knight Riders defeated Guyana Amazon Warriors in the final by 8 wickets. Earlier in CPL 2019, Riders defeated St Kitts & Nevis Patriots by three wickets. Riders will be all set to clinch their third consecutive title.

(The above story first appeared on LatestLY on Sep 06, 2019 05:16 PM IST. For more news and updates on politics, world, sports, entertainment and lifestyle, log on to our website latestly.com).