Both the former champions are yet to taste defeat in this UAE leg of IPL 2021 and with them being in such good form, it would also be difficult to predict the winner of this contest. The match between Eoin Morgan's Knights and MS Dhoni's Super Kings would begin at 3:30 PM IST. 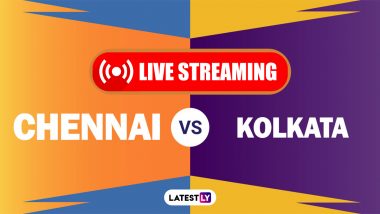 After a string of two wins each, Chennai Super Kings (CSK) and Kolkata Knight Riders (KKR) are now on a collision course as they take on each other in the Indian Premier League on Sunday, September 26. The match would be played at the Sheikh Zayed Cricket Stadium in Abu Dhabi and is scheduled to begin at 3:30 PM IST (Indian Standard Time). The UAE leg of IPL 2021 has seen both these teams perform to the best of their potential. While the best might be yet to come, one can argue that these two franchises have not done much wrong in the two matches they played in the UAE since September 19. Chennai announced their title challenge and reminded everyone of their good form by beating champions Mumbai Indians and then Royal Challengers Bangalore. They have looked solid in all aspects of the game and has been tipped by many to go all the way this year. CSK vs KKR Preview: Likely Playing XIs, Key Battles, Head to Head and Other Things You Need To Know About VIVO IPL 2021 Match 38

The Knight Riders too have followed a similar path. Ever since the IPL resumed in UAE this month, they seemed to have been playing like a completely new side, transformed by aggression and class. KKR now don't look anything like their performances from the first leg of IPL 2021. Now, they are playing with renewed vigour and fearlessess and the inclusion of Venkatesh Iyer has been a real game-changer for them. On the bowling front, Prasidh Krishna and Lockie Ferguson has done relatively well and so has mystery spinner Varun Chakravarthy, who is expected to play a similar sort of role for India in the T20 World Cup following the IPL.

With both these teams in good form, it is difficult to predict the winner. But one thing's for sure-we are in for a thrilling match.

Those unable to watch the CSK vs KKR match live on television can follow the game online. Disney+Hotstar will be live streaming the Chennai Super Kings vs Kolkata Knight Riders match online for its fans in India. Fans, however, need to subscribe to Hotstar by paying a nominal subscription fee. JIO are also providing Hotstar subscriptions on select plans.

(The above story first appeared on LatestLY on Sep 26, 2021 09:41 AM IST. For more news and updates on politics, world, sports, entertainment and lifestyle, log on to our website latestly.com).