CSK vs KKR Preview: Likely Playing XIs, Key Battles, Head to Head and Other Things You Need To Know About VIVO IPL 2021 Match 38

A memorable clash awaits as these two undefeated sides in the UAE leg of IPL 2021 battle against each other. Would MS Dhoni's men come up victorious once again or would Eoin Morgan's fearless Knight Riders continue to take UAE and the world with their new found approach and mojo? Tune in on Sunday to find out! 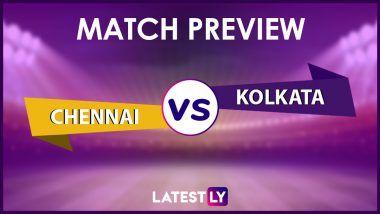 Chennai Super Kings (CSK) are all set to lock horns against Kolkata Knight Riders (KKR) in a blockbuster fixture on Sunday, September 26. This clash, which would be played at the Sheikh Zayed Cricket Stadium would be an interesting one for so many reasons. First, there is always an air of extra competitiveness and rivalry when KKR play CSK in the IPL. The Kolkata franchise halted Chennai's IPL title winning run back in 2012 when the Gautam Gambhir-led franchise had historically defeated the Super Kings in the final. Secondly,  the match that these two sides played in the India leg of the competition this year, turned out to be one of the most exciting ones of the tournament. Ruturaj Gaikwad did his thing and so did Faf Du Plessis, who cracked a eye-catching 95 and CSK ended up with a mammoth 220 runs on the board. KKR succumbed to the pressure and got reduced to 31/5. But then a 81-run stand between Andre Russell and Dinesh Karthik kept them in the chase and so did a spectacular 66 off 34 balls by Pat Cummins. But eventually Eoin Morgan's men were defeated by just 18 runs. CSK vs KKR, Dream11 Team Prediction IPL 2021: Tips To Pick Best Fantasy Playing XI for Chennai Super Kings vs Kolkata Knight Riders Indian Premier League Season 14 Match 38

Thirdly, this time, it would be a battle between two undefeated sides in the UAE leg so far. Both these teams defeated Royal Challengers Bangalore and Mumbai Indians and it is time that Morgan's Knights, who have so far impressed everyone with a fearless attitude, take on the mastermind MS Dhoni and his Super Kings, who have placed themselves in a good spot to make it to the playoffs. For KKR, a win would do a world of good in terms of qualifying for the next stage and also it will boost their confidence, having beaten a top side. Chennai Super Kings have looked absolutely clinical in the two matches they have played so far. A super Sunday awaits as KKR and CSK fans would be glued to their TV and computer or mobile screens, in a bid to find out who wins bragging rights in this clash of the titans. CSK vs KKR, Abu Dhabi Weather, Rain Forecast and Pitch Report: Here’s How Weather Will Behave for Chennai Super Kings vs Kolkata Knight Riders IPL 2021 Clash at Sheikh Zayed Cricket Stadium

The two teams have played against each other a total of 26 times and Chennai hold the upper hand with a superior head-to-head record with 16 wins to their name. Knight Riders have emerged triumphant in nine matches with the remaining match ending in a no result. IPL 2021 Points Table Updated

Ruturaj Gaikwad and Dwayne Bravo will be the key players for Chennai Super Kings as they look to maintain their winning run while Varun Chakravarthy and Venkatesh Iyer will play very important roles for KKR.

Ruturaj Gaikwad vs Varun Chakravarthy will be one of the main battles to look out for and Deepak Chahar vs Venkatesh Iyer  will also be a key clash to look forward to.

Chennai Super Kings vs Kolkata Knight Riders (CSK vs KKR) match in IPL 2021 will be played at the Sheikh Zayed Cricket Stadium in Abu Dhabi on September 26, 2021 (Sunday). The game is scheduled to begin at 03:30 pm IST (Indian Standard Time). Toss will be held at 03:00 pm.

(The above story first appeared on LatestLY on Sep 25, 2021 04:47 PM IST. For more news and updates on politics, world, sports, entertainment and lifestyle, log on to our website latestly.com).