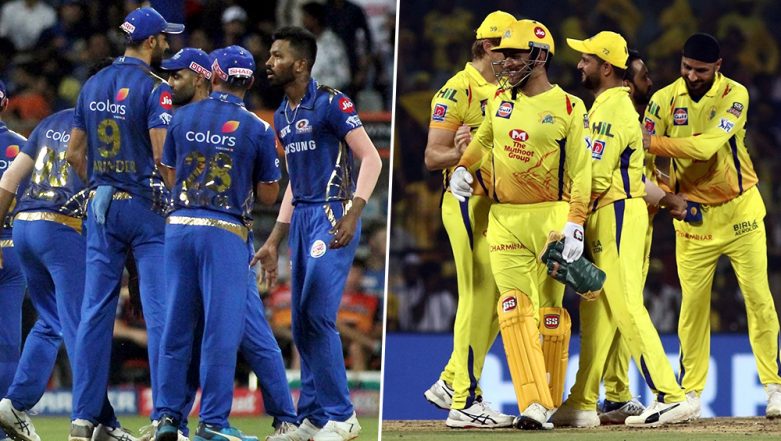 Chennai Super Kings (CSK) will play Mumbai Indians (MI) in the Qualifier 1 of Indian Premier League (IPL), 2019 which will take place at MA Chidambaram Stadium, Chennai which is CSK team's home ground. Chennai team finished on the 2nd spot, while Mumbai ended up on top. CSK lost their league match against Kings XI Punjab (KXIP) while MI won their last encounter against Kolkata Knight Riders (KKR) to knock them out of the on-going IPL tournament and make way for Sunrisers Hyderabad in the fourth spot. Ahead of MI vs CSK match, let us go through four of the best contest between both teams in the history of IPL. CSK vs MI, IPL 2019 Qualifier 1 Match Predictions: MS Dhoni's Chennai Super Kings or Rohit Sharma's Mumbai Indians, Who Will Seal a Spot in IPL 12 Final?

Both Mumbai Indians and Chennai Super Kings have won the IPL trophy thrice. The latter won in the year 2013, 2015 and 2017 while the former won in 2010, 2011 and 2018. They are indeed the most successful teams in the Indian Premier League. CSK vs MI Head-to-Head Record: Ahead of IPL 2019 Qualifier 1 Clash, Here Are Match Results of Last 5 Chennai Super Kings vs Mumbai Indians Encounters!

Four Best Matches Between CSK & Mumbai in the history of IPL

This season of IPL took place in South Africa as General Election 2009 was being held in India at that time. This was the season where Little Master Sachin Tendulkar was part of Mumbai Indians playing XI. This match was played on April 18, 2009, at Cape Town. Mumbai Indians won this match by 19 runs after posting a total of 165 runs. It was that time when legendary cricketers like Sanath Jayasuriya and Sachin Tendulkar used to open the inning for Mumbai Indians, in this match Master Blaster Tendulkar played a fine knock of unbeaten 59 runs from 49 balls to help his team post a total of 165 runs. In reply, CSK managed to score only 146 runs where Matthew Hayden played a brilliant inning of 44 from 35 balls. Lasith Malinga was the star bowler for Mumbai Indians as he bagged 3 wickets by just giving away 15 runs from 4 overs. Sachin Tendulkar was awarded the Man of the Match for his unbeaten half-century. Click here to view the highlights of this match. CSK vs MI, IPL 2019 Qualifier 1 Match Preview: Chennai Super Kings, Mumbai Indians to Lock Horns at MA Chidambaram Stadium For Spot In Final.

This contest took place at DY Patil Stadium, Navi Mumbai where Chennai Super Kings won their first IPL trophy. CSK batted first to put on a total of 168 where Suresh Raina played a fine knock of 57 from 35 balls. In reply, Mumbai wasn't able to chase down the target as they lost the match by 22 runs, as CSK spinners Shadab Jakati, Muttiah Muralitharan and Ravichandran Ashwin did not allow MI batsman to score runs from the bat easily. Suresh Raina was awarded the Man of the Match in this game. Click here to view the highlights of this match.

This match happened at Eden Garden, Kolkata where Mumbai Indians became the IPL Champions for the second time. MI defeated CSK in the final of IPL 2015 by 41 runs. Mumbai posted a mammoth total of 202 where Lendl Simmons and captain Rohit Sharma contributed brilliantly by scoring 68(45) and 50(26) respectively. CSK never seem to be in the chase as their inning succumbed to 161/8 in 20 overs. Mitchell McClenaghan and Lasith Malinga were star bowlers for MI as Malinga had figures of 2/25 and McClenaghan bagged 3 wickets by just giving away 25 runs in 4 overs. Rohit Sharma was awarded the Man of the Match for his quick fifty. Click here to view the highlights of this match.

This was the opening game of IPL 2008 season which was played at Wankhede Stadium. Chennai Super Kings won the IPL trophy for the third time in this season. This game will be remembered for Dwayne Bravo brilliant inning of 68 from 30 balls to chase down the total of 165 and Kedar Jadhav brilliant six at the end where he came down to bat with a hamstring injury. Mumbai Indians bowlers kept things under control and were very match under control until Bravo started hitting the ball around the park. Mumbai Indians unexpectedly lost the match by one wicket as no one could have expected Kedar Jadhav to smashed a six with a hamstring pull. Click here to view the highlights of this match. This was indeed the best game between Mumbai and Chennai till date in the history of IPL.

Mumbai Indians with two wins against Chennai Super Kings in the ongoing IPL tournament can fancy their chances tonight. With MI players like Lasith Malinga, Hardik Pandya, Suryakumar Yadav and the Rohit Sharma in the form they are expected to come strong on CSK side. While for Chennai they have lost their batsman all-rounder Kedar Jadhav just at the crucial stage of the tournament as he injured his shoulder while fielding against KXIP. However, CSK spinner Imran Tahir will play a vital role in the upcoming match and can utilise well the condition at MA Chidambaram stadium.