The Prize money that the ICC announced for each team prior to the start of CWC 2019 is the highest ever in cricket’s history. Therefore World Cup champions England received a record $4 million cash, which is the highest a champion team has ever received in a Cricket World Cup history. 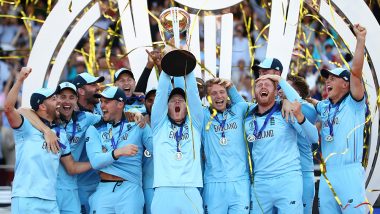 England beat New Zealand to lift its first ever World Cup title. The winner of the final in CWC 2019 after two tied innings – 50 overs and super over – was decided on the count of boundaries with England edging New Zealand out, courtesy of hitting six more boundaries. Ben Stokes was declared the Player of the Match for his magnificent innings of 84 that helped England to not just clinch their maiden World Cup trophy but also walk away with the biggest prize money. How And Why England Won ICC Cricket World Cup 2019 Final Against New Zealand Despite Match and Super Over Being A Tie? Here's What Rules Say.

The Prize money that the International Cricket Council (ICC) announced for each team prior to the start of ICC Cricket World Cup 2019 is the highest ever in cricket’s history. Therefore World Cup champions England received a record $4 million cash, which is the highest a champion team has ever received in a Cricket World Cup history. Latest ICC ODI Rankings 2019: Kane Williamson on Sixth Spot in Batsmen's List, Ben Stokes Second-Best All-Rounder.

Meanwhile, runner-up New Zealand walked home with more than @ million, while both India and Australia – who were knocked out in the semi-finals – also received more than a million dollar cash as prize money. Check Out how much each team earned both in US Dollar and Indian currency. ICC Team of Tournament: Rohit Sharma, Jasprit Bumrah Make it to ICC Dream Team of World Cup 2019, David Warner, Virat Kohli Miss Out.

ICC Cricket World Cup 2019 finally drew to an end after a month and a half period of intense cricket, rainfall, controversies and memorable celebrations. Fans in the earlier part of CWC 2019 criticised the tournament in England for the frequent interventions of rain that disrupted many games and prevented some more from being played. But the final has been deemed as the greatest World Cup final of all-time challenging even the 1999 semi-final between Australia and South Africa.

(The above story first appeared on LatestLY on Jul 15, 2019 09:26 PM IST. For more news and updates on politics, world, sports, entertainment and lifestyle, log on to our website latestly.com).