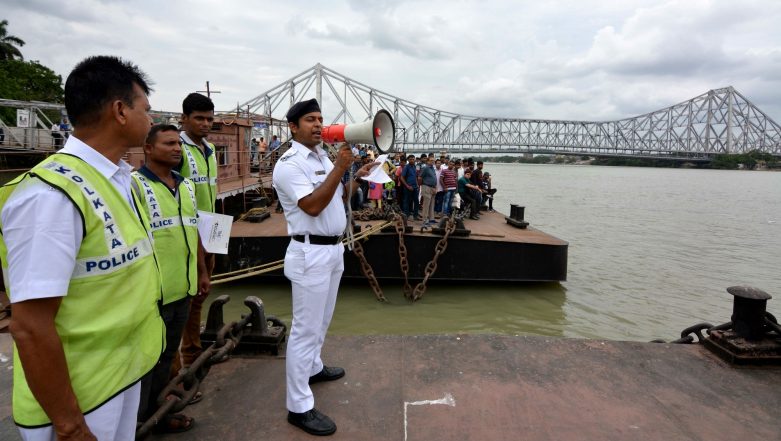 A River Traffic Police personnel makes announcements regarding the precautionary measures, in the wake of cyclone 'Fani', in Kolkata. (Photo Credits: IANS)

Kolkata, May 2: As a safety measure, the Cricket Association of Bengal (CAB) said it would postpone its local matches between May 3-6 owing to Cyclone Fani which is set to travel across West Bengal starting early on Saturday. West Bengal Under 'Yellow Alert', Gears Up Against Cyclone Fani.

"This is to inform all concerned that cricket matches of this association scheduled to be held from May 3 and 6 are hereby postponed owing to cyclonic storm 'Fani' as forecasted by the Metrological department, Kolkata.

The revised dates of such postponed matches would be intimated in due course," a statement from the CAB read. The matches include Under-18 club level matches, first and second division championship playoff games, knockout matches of One Day Tournament,'women's T20 semi-finals and university matches.

"Safety of the players is paramount. Taking that into consideration and also to ensure there are no logistical difficulties faced by them, we have decided to put on hold the matches at moment," CAB Joint Secretary Avishek Dalmiya told IANS.

"Since May 6 is an election day here in West Bengal, we would again resume matches from May 7," he added. Cyclone Fani Update: GoAir, IndiGo Flights To and From Bhubaneswar Airport Cancelled; Vistara Waives Fees as Landfall Nears.

With less than 24 hours left for Cyclone Fani to make landfall in neighbouring Odisha coast, the West Bengal government and civic bodies worked on war footing to cope with the storm set to travel across the state starting early Saturday. The state government and the Kolkata Municipal Corporation are bracing for a severely stormy weekend.