Pollard was dismayed after Gunathilaka kicked the ball away from his path and immediately appealed. The on-field umpires Joel Wilson and Gregory Brathwaite then referred the call to television umpire Nigel Duguid, who ruled that Gunathilaka had deliberately impeded the bowler although there was little evidence to prove his interpretation. 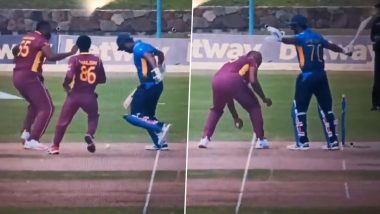 Danushka Gunathilaka Was Given Out for Obstructing Field (Photo Credits: Twitter)

Danushka Gunathilaka was given out for ‘obstructing the field’ during the West Indies vs Sri Lanka 1st ODI match in Antigua. The Sri Lanka opening batsman became just the eighth cricketer in history to be out by this mode of dismissal. His wicket for obstructing the field stirred another controversy with many experts and fans divided in opinion over the bizarre dismissal. Gunathilaka’s dismissal also sparked a collapse as Sri Lanka went from 112/1 to 232 all-out after opting to bat first. West Indies, helped by Shai Hope’s century, chased it down with eight-wickets and three overs to spare. MS Dhoni Seen Sweating It Out in the Nets Ahead of IPL 2021, Karn Sharma Reaches Chennai for CSK Camp (See Pics).

The incident occurred in the 22nd over of Sri Lanka’s innings. Gunathilaka, who has just completed his half-century, defended a length delivery from Kieron Pollard and advanced down the pitch for a quick single before deciding against it and retreating back into his crease. But as he stepped back, Gunathilaka stepped on the ball and knocked it backwards. India vs England 1st T20I 2021: Leave Rishabh Pant Alone, He'll Deliver Match-Winning Performances, Says Rohit Sharma.

Pollard, who was hurrying to reach the ball and effect a run-out, was dismayed after Gunathilaka kicked the ball away from his path and immediately appealed. The on-field umpires Joel Wilson and Gregory Brathwaite then referred the call to television umpire Nigel Duguid, who ruled that Gunathilaka had deliberately attempted to foil the run-out and impeded the bowler although there was little evidence to prove his interpretation. Take a look at the video of the incident.

Danushka Gunathilaka Given Out Obstructing the Field

Watch The Incident From Another Angle

Sri Lanka’s Danushka Gunathilaka Given Out Obstructing The Field In First ODI Against West Indiespic.twitter.com/0yzDBK66cz

Gunathilaka became the first Sri Lankan cricketer to be dismissed obstructing the field. Sri Lanka coach Micky Arthur was furious with the decision and had a lengthy chat with the match referee. Former Australia cricketer and ex-Sri Lanka coach Tom Moody also felt that the batsman was not attempting to obstruct the run-out. Former West Indies captain Darren Sammy also echoed the same sentiments and said he wouldn’t have appealed. But Australia leg-spinner Bra Hogg said the umpires had made the right call.

Don’t think that was willful at all. I wouldn’t appeal but hey 🤷🏿‍♂️🤷🏿‍♂️

Gunathilaka definitely out obstructing the fielder, he had showed no urgency getting back in his crease as 2 fielders converge on the ball, run out opportunity at the other end. Pollard full rights to appeal & umpires have made a good decision. Game Awareness #SLvWI #cricket pic.twitter.com/FLkseX1MES

It Was Not At All Willful, Says Tom Moody

“Wilful obstruction” no way was that wilful... #shocker #WIvSL

Sri Lanka eventually suffered a collapse after Gunathilaka’s dismissal and were bundled for 232 runs. Gunathilaka and Sri Lanka captain Dimuth Karunaratne had stitched a century-run opening stand before both were out in quick succession. West Indies then chased down the target in 47 overs with Shai Hope hitting a century while Evin Lewis scored a half-century.

(The above story first appeared on LatestLY on Mar 11, 2021 11:36 AM IST. For more news and updates on politics, world, sports, entertainment and lifestyle, log on to our website latestly.com).