David Warner Asks Fans to Caption His Picture With Kite, Fans Come Up With Wittiest Comments! 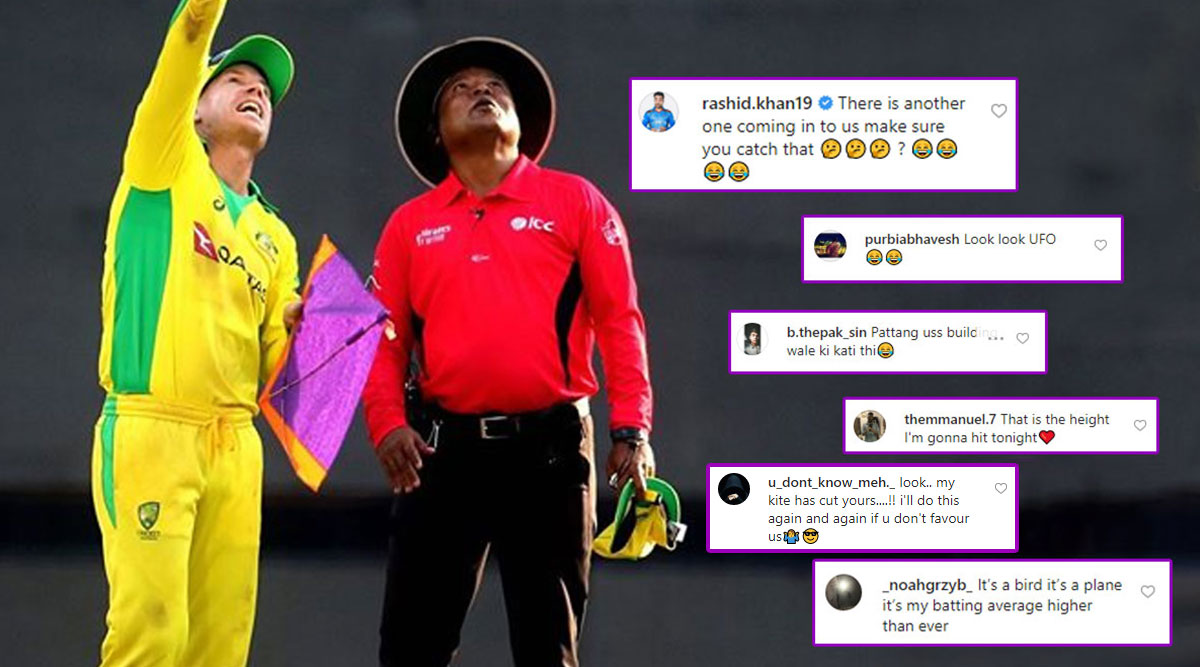 David Warner was on a roll in the first ODI as he mustered his 18th century in One Day Internationals and guided Australia to a thumping 10-wicket victory against India. However, the swashbuckling southpaw wasn’t only delighted by his batting display but also by the sudden invasion of a kite on the field. During the last over of the Indian innings, a kite came on the field from nowhere and play came to a halt for a brief time. Warner was the one who got the Kite and he removed it. However, a candid picture of him was captured with the kite and the southpaw asked his fans to caption it. India vs Australia, Highlights And Cricket Score 1st ODI Match.

Post the match, the 33-year old took to his official Instagram page and posted a snap with stand-in umpire Chettithody Shamshuddin, writing: “Caption this.” His fans didn’t take long in accepting his request and the comment section was filled in no time. In the picture, the Australian can be seen holding the kite and pointing his finger upwards while trying to show umpire something. His Indian fans, especially, made hilarious comments which certainly have made Warner smile too. Have a look. IND vs AUS 1st ODI Funny Memes Go Viral As Aaron Finch-Led Australia Thrash Virat Kohli's India By 10 Wickets For The First Time In History!

Is it a bird, Is it a plane, is it superman? No it’s Pat Cummins.

There are more kites umpire, we should stop the play 🤣🤣

The sniper is up there, it’s the only way I can stop Broad getting me out

Umpire, I need that blue one flying over there otherwise I won’t play 🤪

Speaking of the first ODI between India and Australia, Aaron Finch invited the home side to bat after winning the toss. The decision looked spot on as Virat Kohli’s men were bundled out for mere 255 runs in the first innings. In reply, Skipper Aaron Finch and David Warner slammed centuries as the Men in Yellow crossed the line without breaking a sweat.

They have also gained a 1-0 lead in the three-match series and will eye to seal the deal in the forthcoming game. On the other hand, the home side has to come good in the next match to stay alive in the series. The second ODI will be played on January 17 at the Saurashtra Cricket Association Stadium in Rajkot.