Nicholas Pooran struck a half-century and Aiden Markram a 25-ball 42 but their efforts went in vain against a big score raised thanks to David Warner and Rovman Powell as Delhi Capitals defeated Sunrisers Hyderabad by 21 runs in Match 50 of the IPL 2022, here on Thursday. 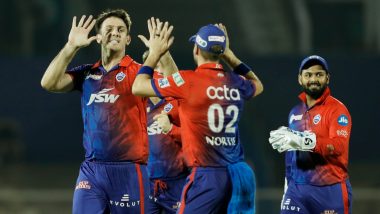 Mumbai, May 5: Nicholas Pooran struck a half-century and Aiden Markram a 25-ball 42 but their efforts went in vain against a big score raised thanks to David Warner and Rovman Powell as Delhi Capitals defeated Sunrisers Hyderabad by 21 runs in Match 50 of the IPL 2022, here on Thursday. Chasing a huge target of 208, Pooran (62 off 34 balls, 4x2, 6x6) while Markram scored a brisk cameo but in the end, their efforts were not enough as Sunrisers Hyderabad could manage only 188/8 in 20 overs. IPL 2022: David Warner Sets Record for Most T20 Half-Centuries, Achieves Feat During DC vs SRH Clash.

Delhi Capitals had posted a big score of 207/3 in 20 overs thanks to an unbeaten 58-ball 92 by David Warner and 67 not out off 35 balls by Rovman Powell as they shared a brilliant 122-run partnership, complementing each other's efforts. While Powell was all power, Warner was sublime and precise as he found the gaps easily to score 12 boundaries and three sixes. In reply, Sunrisers Hyderabad got off to a poor start as they lost Abhishek Sharma (7) in the second over with the score of 8 runs as he struck a half-volley on his pads down the throat of the fielder at short fine-leg.

They were soon down to 37/3 with skipper Kane Williamson (4), who edged behind off Anrich Nortje, and Rahul Tripathy (22) wasted his start by picking out deep backward square with a short-arm jab off Mitchell Marsh. Pooran and Markram came together to raise 60 runs for the fourth wicket, both hitting some aggressive shots as they resurrected the innings. But Markram was out while trying to hit another big one and was caught by Kuldeep Yadav off Khaleel Ahmed as SRH fell to 97/4 in the 13th over. Delhi Capitals vs Sunrisers Hyderabad IPL 2022: 3 Reasons Why SRH Lost.

Pooran tried to take the battle to Delhi Capitals as he completed his half-century off 29 balls. SRH continued to lose wickets at the other end as Shashank Singh (10) and Sean Abbott (7) departed, leading Pooran to continue waging the lone battle. He was the seventh batsman to get out, caught by Powell off Shardul Thakur. miscuing a waist-high full toss and sending it straight to long-on, as the run rate continued to mount. Though Kartik Tyagi landed a few lusty blows but in the end, the asking rate was too much for them as Sunrisers fell short by 21 runs. Khaleel Ahmed was the most successful Delhi Capitals bowler with 3/30 off four overs while Shardul Thakur ended with 2/44.

(The above story first appeared on LatestLY on May 06, 2022 10:21 AM IST. For more news and updates on politics, world, sports, entertainment and lifestyle, log on to our website latestly.com).