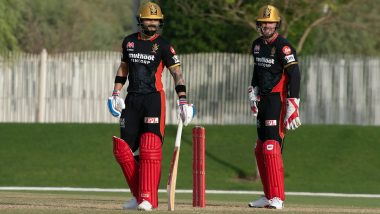 With the 13th edition of Indian Premier League (IPL 2020) just a few days away, Team Virat Kohli went head to head with Team Yuzvendra Chahal in Royal Challengers Bangalore (RCB) intra-squad match. Young batsman Devdutt Padikkal opened the innings with AB de Villiers as Chahal's side batted first. The former South African captain looked in great touch, scoring 43 runs off mere 33 balls. On the other hand, Padikkal played some impressive strokes. However, the wicket was not easy to bat on as Chahal's team posted 125 in their allotted 20 overs. Washington Sundar was the pick of Team Virat Kohli bowlers as he took two wickets while the good thing was that South African legend bowled four overs in the difficult conditions. RCB Team Profile for IPL 2020: Royal Challengers Bangalore Squad in UAE, Stats & Records and Full List of Players.

In reply, Virat Kohli came out to open the innings with Parthiv Patel, and the former played some attractive shots. However, the wicket seemed to have slowed down a bit as Team Chahal won the game. Left-arm spinner Shahbaz Nadeem was the standout performer for Chahal's side with the ball as he picked three wickets while giving away just 11 runs in his quota of four overs. RCB also shared the highlights of the warm-up match. Royal Challengers Bangalore Likely Playing XI vs Sunrisers Hyderabad.

Speaking about the side's combination, RCB head coach Mike Hesson said: "We looked about match-ups. We wanted our opening bowlers to bowl to left and right-handers. We wanted to look at some possibilities in terms of partnerships. We also provide in each team, leg-spinners, off-spinners, left-arm spinners to each team so that we could provide with those match-ups which they are likely to face in a week's time."

Hesson also said that the team management wants Chahal to involve in leadership role due to his rich experience. "We want Yuzi to be part of our leadership group, where he brings a different perspective. Looks after that spin bowling group of ours. We want him to think a little bit more about the game and bring that out," Hesson added. Meanwhile, Virat Kohli and Co will begin their campaign against Sunrisers Hyderabad on September 20 at the Dubai International Stadium.

(The above story first appeared on LatestLY on Sep 18, 2020 09:03 AM IST. For more news and updates on politics, world, sports, entertainment and lifestyle, log on to our website latestly.com).