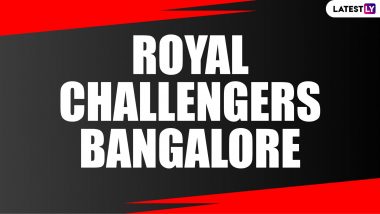 Royal Challengers Bangalore will search for their maiden IPL title when the T20 franchise tournament begins in UAE from September 19. RCB have suffered three final heartbreaks in 12 seasons of Indian Premier League. But with a balanced squad at their disposal for IPL 2020, the Bengaluru-based franchise will hope to get fourth time lucky. The Virat Kohli-captained side have hit the wooden spoon twice in the last three IPL seasons but will be confident of springing a surprise this campaign. RCB Squad for IPL 2020 in UAE: Check Updated Players' List of Royal Challengers Bangalore Team Led by Virat Kohli for Indian Premier League Season 13.

RCB have always had a strong team on paper and it has only been the inconsistency in individual performances and team selection that have led the franchise down on most occasions. They underwent a massive overhaul at the end of last season-changing both management personnel as well as the players. The team already boasts terrific match-winners in Virat Kohli, AB de Villiers and Yuzvendra Chahal and at the IPL 2020 Players Auction, they added more game-changers in the form of Aaron Finch, Chris Morris, Dale Steyn, Isuru Udana and Kane Richardson. IPL 2020 Captains List: From MS Dhoni to Virat Kohli, Check Out Skippers of All 8 Teams in Indian Premier League 13.

Despite their struggles and poor campaigns, RCB have always been among the favourites and a team to beat. This season it will be no different. Inconsistency have hurt them big in the past but with more experience added to their already formidable squad, the red and gold brigade will hope this time it is their season, their title to win.

Virat Kohli, AB de Villiers, Aaron Finch, Yuzvendra Chahal, Moeen Ali, Chris Morris, Shivam Dube and Dale Steyn are some of the top players for Royal Challengers Bangalore and will be key to how their season unfolds this year.

Royal Challengers Bangalore have played 181 matches in the Indian Premier League and have won 83 of those games while conceding defeats in 92 matches. They have also featured in two tied games and four matches ended in no result. RCB has a win percentage of 47.45, third-lowest among teams to have played at least 10 IPL seasons.

Most Runs and Wickets for RCB

Virat Kohli is the leading run-scorer for RCB in the history of the Indian Premier League. The Royal Challengers Bangalore captain also leads the tournament list of all-time highest run-getters. Kohli has scored 5412 runs in 169 innings with five hundreds and 36 half-centuries to his name. Yuzvendra Chahal holds the record for most wickets in RCB shirt. He has taken 82 wickets in 69 matches.

(The above story first appeared on LatestLY on Aug 28, 2020 03:21 PM IST. For more news and updates on politics, world, sports, entertainment and lifestyle, log on to our website latestly.com).