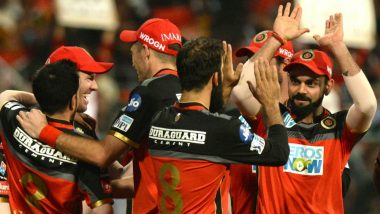 Royal Challengers Bangalore (RCB) will finally look to break their jinx in the 13th edition of the Indian Premier League (IPL 2020). Despite having the services of many T20 stars like AB de Villiers and Virat Kohli, the Bengaluru-based team hasn’t been able to win a title yet but are looking determined to get the glory in UAE. The Virat Kohli-led side has been hitting the training ground hard lately, and one can visit RCB’s social media page to verify the fact. Also, the all-round balance in the side seems better this time but the side has to come together as unit to lift the title. RCB Team Profile for IPL 2020: Royal Challengers Bangalore Squad in UAE, Stats & Records and Full List of Players.

RCB’s journey in the previous seasons has all been about momentum. The team needs to get off to a winning start to advance to the playoffs. On the other hand, they haven’t been able to bounce back after losing the first few matches. Also, they have qualified for as many as three IPL finals but have crossed the final hurdle. Hence, they need to rectify their mistakes to change their fortunes. RCB will start their IPL 2020 campaign against David Warner’s Sunrisers Hyderabad on September 21 at the Dubai International stadium. As the match gets lined-up, let’s look at Bangalore’s likely IPL XI. Team RCB Key Players for IPL 2020: Virat Kohli, AB de Villiers, Navdeep Saini and Other Cricketers to Watch Out.

Openers: New-recruits Aaron Finch and Devdutt Padikkal are most likely to open the RCB innings in their first match. The Australian captain has been in impressive form lately, and his knack of taking the match away from the opposition in the initial overs should boost the team management’s morale. On the other hand, the Karnataka batsman was in sublime touch in the domestic season and is looking set to receive his maiden IPL cap.

Middle Order: With Virat Kohli and AB de Villiers in the ranks, RCB has one of the strongest middle order in IPL. Both the dashers have been cornerstones of the side’s batting line-up over the years and also enjoy batting with each other. Furthermore, De Villiers is expected to don the wicket-keeping gloves in the season, which will provide balance to the team.

All-Rounders: England’s Moeen Ali will have a crucial to play in the upcoming season. The southpaw can gather quick runs in the middle overs, and his off-spin in the turning tracks of UAE will come in handy. Shivam Dube and Washington Sundar, who have played a lot of international T20Is in the past year, will be the other two all-rounders in the side.

Bowlers: With only four foreign players allowed in per side, Kohli has to choose between Chris Morris and Dale Steyn. The former, who has been bought for INR 10 crore, comes up with all-round abilities but the team management is likely to go with Steyn as death bowling has been an area of concern for RCB. Indian duo Navdeep Saini and Umesh Yadav will be the other two pacers in the team while the side’s trump card Yuzvendra Chahal will handle the mantle in the spin department.

Notably, many experts like Aakash Chopra and Brad Hogg have backed Kohli and Co to get their hands on the prestigious trophy. To do that, however, RCB have to rise to the new challenge in the UAE tracks.

(The above story first appeared on LatestLY on Sep 16, 2020 10:03 AM IST. For more news and updates on politics, world, sports, entertainment and lifestyle, log on to our website latestly.com).