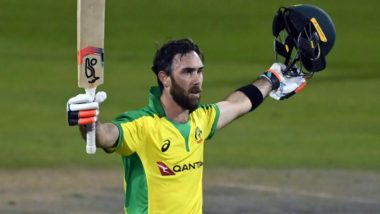 Australia defeated England in the third ODI at the Old Trafford Cricket Stadium on Wednesday to win the three-match series 2-1. The visitors recovered from a dire situation to record a win which looked impossible at one stage courtesy of a second ODI century from Glenn Maxwell. Fans were impressed with grit and determination shown by the Australian batsmen and praised him on social media. ENG vs AUS Stat Highlights 3rd ODI 2020: Glenn Maxwell & Alex Carey’s Centuries Lead Australia to 2-1 Series Win.

After electing to bat first, England got off to a poor start losing two wickets in the opening two deliveries of the game but managed to get themselves back into the game. Johnny Bairstow registers his 10th century in the format and courtesy of fighting half-centuries from Chris Woakes and Sam Billings, the Three Lions managed to put on a score of 302/7 in 50 overs. David Warner Trolled Brutally After Getting Out to Part-Timer Joe Root During ENG vs AUS 3rd ODI (See Funny Memes and Reactions).

Searching for a series win, the visitors lost early wickets as well, struggling at 73/5 at one stage. However, a brilliant partnership from Glenn Maxwell and Alex Carey set up the stage for visitors to record an improbable victory. The batsmen stitched up a 200+ run partnership with both of them registering centuries, however, it was Maxwell’s knock of 108 runs from 90 deliveries which caught fans’ attention.

Maxwell in serious form. Be ready to witness something disastrous to the bowlers in UAE. 🔥#Fantasytips #IPL2020 pic.twitter.com/PBMUSnT7TE

A Big Show special that from Maxwell. Telling though it’s only his second ODI hundred. Carey has the same number. #EngvAus

Never Count Him Out

never write off Glenn Maxwell however much you want to https://t.co/vbjz88F2WA

What a knock by super special Glenn Maxwell and Alex Carey. An innings to remember lifetime 💪💪#ENGvAUS

This is the first time since 2015 that England have lost a series at home and was as dramatic as they come. Maxwell also reached the milestone of 3000 ODI runs becoming the 23rd batsmen from Australia to achieve that feat. He also became the quickest batsmen in terms of balls required to reach 3000 runs.

Glenn Maxwell will now travel to UAE to take part in the latest edition of the Indian Premier League. The Australian was bought by Kings XI Punjab during the payee auction last December and will be hoping to lead the franchise to their first-ever IPL title.

(The above story first appeared on LatestLY on Sep 17, 2020 08:49 AM IST. For more news and updates on politics, world, sports, entertainment and lifestyle, log on to our website latestly.com).