England began steadily with a 72-run stand between Rory Burns and Dom Sibley but were soon rattled by the New Zealand bowlers. But England found resistance through Dan Lawrence and Burns, who both scored half-centuries to keep the game in balance. 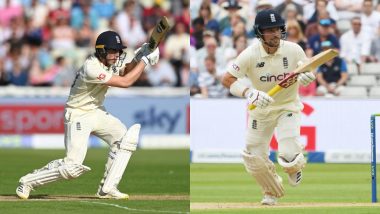 Rory Burns and Dan Lawrence struck half-centuries as England ended on 258/7 against New Zealand at the end of the first day of the second Test at Edgebaston, Birmingham on Thursday. England won the toss and decided to bat first. Their decision was paid off by the opening pair of Burns and Dom Sibley as they patiently played out 29 overs and scoring just 67 runs. Most importantly, they didn't let New Zealand dominate early on with quick wickets. But the visitors were quick to break the English resistance after lunch, sending back Sibley (35) and Zak Crawley (0) in quick succession. The scoreboard suddenly read 73/2. Sports News | Eng Vs NZ, 2nd Test: Burns, Lawrence Shine as Hosts Register 258/7 on Day One

New Zealand made a lot of changes out of which the notable ones included the absences of Kane Williamson, Mitchell Santner and BJ Watling--all missing out due to injury. Matt Henry, who was one of the inclusions, then turned up to dismiss England captain Joe Root for just four runs. New Zealand captained by Tom Latham kept chipping away at the wickets, reducing England to 152/4 in the afternoon session. Burns held the other end strong as he scored a solid 81 before being removed by Trent Boult. Lawrence too batted well for his 67 as England found him and Mark Wood (16*) at the crease at the end of the day's play.

#The opening 72-run stand between Rory Burns and Dom Sibley was the first time that England recorded a wicketless first session in a home Test since 2011.

#It was also the sixth half-century stand between Rory Burns and Dom Sibley.

#James Bracey was dismissed for a golden duck after failing to get off the mark at Lords in the first Test.

#Rory Burns' 81 was his ninth 50-plus score in 13 innings. He now has the most number of 50+ scorers in first-class cricket played in England this summer.

#Since making his debut in 2019, Dom Sibley has left more deliveries than any other player with 672 leaves.

England would hope for Lawrence to continue batting the way he has been doing so far so that they end up with a respectable total on the board.

(The above story first appeared on LatestLY on Jun 11, 2021 12:59 AM IST. For more news and updates on politics, world, sports, entertainment and lifestyle, log on to our website latestly.com).