England vs Australia 3rd ODI 2020: Jofra Archer, Aaron Finch, Eoin Morgan and Other Key Players to Watch Out for in Manchester 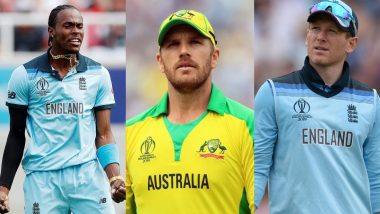 England and Australia will vie for a series win when they face-off in the third and final game of a three-match series on Wednesday (September 16). The England vs Australia ODI series is tied on 1-1 with the series decider to be played at the Old Trafford cricket ground in Manchester. Australia won the first match by 19 runs while England fought back to level the series with a 24-run win in the second game. Sides batting first have won both the matches and bowlers have made the difference on both occasions. Ahead of the ENG vs AUS 3rd ODI match, take a look at some key players from both teams for the series decider. England vs Australia Manchester, Pitch Report & Rain Forecast: Here’s How Weather Will Behave for ENG vs AUS 3rd ODI 2020 at Old Trafford Cricket Ground.

Australia will rue a missed opportunity to seal the series win in the second ODI. The visitors beat England convincingly in the first game and looked set for a series win in the second match. Australia were on 144-2 in the 31st over chasing 232 to win and clinch the series. But Aaron Finch’s men bundled for 207 after losing eight wickets for only 63 runs in 17 overs. England fought back with brilliant spells from Jofra Archer and Chris Woakes, who took three wickets each. England vs Australia 3rd ODI 2020: Aaron Finch vs Jofra Archer and Other Exciting Mini Battles to Watch Out in Manchester.

The Australia captain has looked in good touch throughout the tour. He scored a fine 73 in the second match on a difficult track and nearly took Australia to a win. His 107-run stand with Marnus Labuschagne put Australia on course to victory before both fell in quick succession. Apart from the bat, Finch has also been excellent as a captain and has used his bowlers wisely to prevent a power-packed England batting line-up from scoring big.

"He has not had a single bat day in white-ball cricket," said captain Eoin Morgan after the second game in which Archer took 3/34 and turned England’s fortunes with two fiery spells while defending a low score. Archer had taken three wickets in the first game also but in the second, he looked a more hostile bowler. He has also given England the early breakthrough in both the games.

He has been by far Australia’s best bowler in the ODI series. Josh Hazlewood’s figures combining both games reads 20 overs, 53 runs and four wickets. He has also bowled five maiden overs. England have failed to read the lanky pacer throughout the series and he has capitalized on the conditions to return with some splendid figures.

Even as most England batsmen around him have struggled, Morgan has looked in great touch. He was unlucky to get out in the first game and top-scored for the hosts in the second game. Morgan seems to be in great form but is yet to hit a big score. He has also been brilliant as captain and marshalled his bowlers well to guide England to one memorable comeback win.

The spinners have bowled well throughout the series although Adil Rashid was taken to the cleaners in the second game. But Rashid performed well with the bat in the second match and his 74-run partnership with Tom Curran eventually made the difference in England posting a respectable total on the board. England were reeling on 149/8 when Curran and Rashid joined hands and slowly steered the hosts past the 200-run mark. Morgan though will want more with the ball from Rashid.

(The above story first appeared on LatestLY on Sep 15, 2020 07:53 PM IST. For more news and updates on politics, world, sports, entertainment and lifestyle, log on to our website latestly.com).