England vs Australia 3rd ODI 2020: Aaron Finch vs Jofra Archer and Other Exciting Mini Battles to Watch Out in Manchester 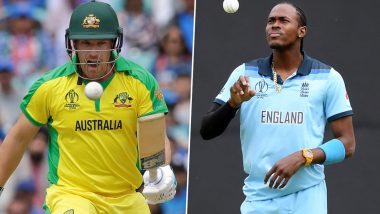 Cricket must brace themselves as Australia and England are set to lock horns in the third and deciding ODI at the Emirates Old Trafford in Manchester on September 16. The three-match series is perfectly poised at 1-1 and both the teams must leave no stones unturned to snatch a victory in the final game. Eoin Morgan and Co must be high on confidence with their emphatic victory in the last match. At the same time, the visitors will aim to redeem themselves after a humiliating loss in the second ODI. Many exciting mini-battles are expected to enhance the thrill of the high-voltage clash. Below, we’ll look at them. ENG vs AUS 2nd ODI 2020 Stat Highlights: Jofra Archer Extends Dominance Over David Warner as England Win by 24 Runs.

After losing the T20I series 1-2, Australia made a brilliant start to ODIs by registering a 19-run win in the opening encounter. Aaron Finch’s men also dominated the major part of the second game and looked set to seal the deal there only. However, their middle-order collapsed shockingly, and the Three Lions managed to keep the series alive with a 24-run victory. Notably, England haven’t lost a bilateral ODI series since the last two years, and they’ll like to extend the record. On the other hand, Aussies have a great chance to break their streak. As the game takes a countdown, let’s look at some individual battles which can be seen in Manchester. Pat Cummins Says ‘It Was Like a Day Four or Five Test Wicket’, As Australia Lose 2nd ODI Against England.

As David Warner looked utterly clueless against Jofra Archer, Aaron Finch will have the onus to tackle the England pacer. Archer has been at his lethal best throughout the tour and will want to take his side to yet another series win. On the other hand, Finch, who scored 73 runs in the last game, has to neutralize the Archer effect to get the favourable result.

The leg-spinner has dismissed Eoin Morgan in the first two games and will not mind doing it one more time. The England captain hasn’t looked comfortable against Zampa’s spinning delivery, and he needs a plan to make a mark in last game of the tournament. On the other hand, the Aussie star, who has taken seven wickets in two makes, must aim to extend his excellent form.

After wreaking havoc in T20I series, Buttler’s bat hasn’t done much talking in the first two ODIs. However, the England wicket-keeper has a knack of delivering in high-voltage matches, and the visitors should be aware of the fact. Finch will rely on Left-arm speedster Mitchell Starc to pierce Buttler’s defences with a thunderbolt early in his innings.

Steve Smith is regained full fitness and is likely to be the part of Australia’s playing XI in the final game. Other than him, Pat Cummins can get rested for this game, and Riley Meredith could receive his maiden ODI cap. On the other hand, the home team is likely to take the field with the same playing XI.

(The above story first appeared on LatestLY on Sep 15, 2020 12:30 PM IST. For more news and updates on politics, world, sports, entertainment and lifestyle, log on to our website latestly.com).