England vs Pakistan 1st Test 2020: Stuart Broad vs Babar Azam and Other Exciting Mini Battles to Watch Out in Manchester 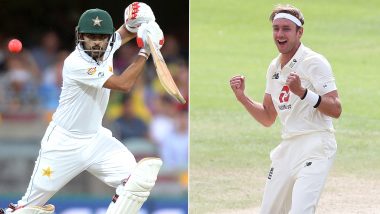 Pakistan Cricket team will resume action after the coronavirus as they’ll take on England in a three-match Test series. The opening encounter will begin on Wednesday (August 5) at the Old Trafford Cricket Ground in Manchester. Joe and Root and Co must be high on confidence with their recent performance as they defeated West Indies by 2-1 and will aim to replicate their heroics. On the other hand, the visiting side, who are in England since the past one month, must have assessed the conditions well and will eye to upset the Three Lions. Below, we’ll look at some mini-battles which can enhance the thrill of the encounter. England vs Pakistan 1st Test 2020: Ben Stokes, Naseem Shah, Babar Azam and Other Key Players.

England might step into the series as favourites. However, Pakistan’s recent Test record in UK as the home team should be aware of the fact. Pakistan have won three of their last six Test in England and will look to add as many as three more victories in the tally. To do that, however, they have to tackle the likes of Ben Stokes and Stuart Broad who were in sensational form in the last Test series. Nevertheless, they also the services of many star players like Babar Azam and Naseem Shah. As the series opener is expected to witness a tight contest between the bat and the cherry, let’s look at some mini-battles which one can see. England vs Pakistan Dream11 Team Prediction: Tips to Pick Best Team.

After getting dropped from the first game, an agitated Stuart Broad breathed fire in the last two Tests against West Indies and scalped 16 wickets. He will aim to extend his golden run while Babar Azam will try to stop him from doing so. The talismanic batsman has proved his mettle all over the world and will like to make a mark in the UK too.

Another hero from the Test series against West Indies, Ben Stokes will be the one of the biggest nemesis for Pakistan. The top-ranked Test all-rounder has got ample rest and he’ll aim to torment the visitors with all his attributes. While Azam and Azhar Ali will tackle the swinging deliveries of Stokes, Naseem Shah will be entrusted with the ball when batsmen Stokes will take the field. The young pacer can swing the ball both ways with a brisk pace and will enjoy bowling in England conditions.

The Pakistan skipper has toured England on multiple occasion and is quite familiar with the conditions too. Facing Broad and James Anderson will not be a new challenge from him. However, that will not be the case when Jofra Archer will challenge him with his thunderbolts. The Barbados-born pacer’s form was quite mild against West Indies. However, Azhar Ali and other Pakistan batsmen can’t afford to take him lightly.

Just like the Test series against West Indies, rain is expected to play a part in the opening day of the encounter. Slight showers are expected to witness in the morning session while the rest of the day is likely to be sunny. Fortunately, clouds are not likely to interrupt the game in the remaining four days.

(The above story first appeared on LatestLY on Aug 05, 2020 08:00 AM IST. For more news and updates on politics, world, sports, entertainment and lifestyle, log on to our website latestly.com).