England vs Pakistan 2020: James Anderson, Azhar Ali and Other Players Who Could Reach Personal Milestones in ENG vs PAK 1st Test 2020 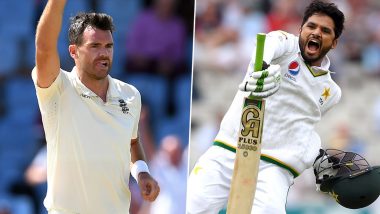 England and Pakistan will lock horns in a three-match Test series with the first game being played on August 5, 2020 (Wednesday) at the Old Trafford Cricket Ground in Manchester. This will be Pakistan’s first international game since February and they will face an England side who are riding high after a dramatic series win over West Indies. Several players from both the teams are in cusps of personal milestones so let’s take a look at them. England vs Pakistan 1st Test 2020: Stuart Broad vs Babar Azam and Other Exciting Mini Battles to Watch Out in Manchester.

Stuart Broad made headlines in the third Test between England and West Indies after he became only the seventh player in Test Cricket history to take 500 wickets, joining his compatriot James Anderson in an elite club. However, the 38-year-old pacer will be in search of another feat when he takes the field against Pakistan. Apart from Anderson, Joe Root, Azhar Ali and Babar Azam are also looking to reach individual landmarks. Ahead of the Series Opener, Here Are Results of Last Five ENG vs PAK Test Matches

James Anderson is 11 wickets away from reaching the 600-wicket mark in Test cricket. The Englishman will be the first pacer to reach this landmark as only three spinners Muttiah Muralitharan, Shane Warne and Anil Kumble have managed to achieve this feat.

The England captain is just 271 runs away from reaching 8,000 runs in Test Cricket. If Root manages to achieve this feat he will be the seventh English batsmen to do so. Alastair Cook, Graham Gooch AJ Stewart, DI Gower and Kevin Pietersen have reached the landmark figure.

Azhar Ali is just 81 runs away from becoming the fifth Pakistani batsmen to score 6000 or more Test runs. He will join the likes of Younis Khan, Javed Miandad, Inzamam-ul-Haq and Mohammad Yousuf in the elusive list.

The 25-year-old batsman is just 150 runs short of reaching 2000 Test runs for Pakistan. Babar Azam has been brilliant for Pakistan scoring 759 runs in his last seven Tests at an average of 75.9 since 2019. He has scored four centuries in that time period.

(The above story first appeared on LatestLY on Aug 05, 2020 12:56 PM IST. For more news and updates on politics, world, sports, entertainment and lifestyle, log on to our website latestly.com).