West Indies have defeated England in all of the five matches they have played at the T20 World Cups and the trend is likely going to continue. However, England look a more balanced outfit and would be aiming for revenge of the 2016 World T20 final loss in Kolkata. 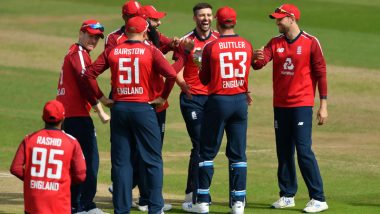 England and West Indies know what it's like to lift the T20 World Cup and their high octane encounter in Dubai is raising a lot of buzz. The last time they battled it out in the World Cup, it was the finals of the 2016 event where Carlos Brathwaite broke English hearts with four sixes in the last over to win the Caribbean nation the title. Revenge will be on the minds of Eoin Morgan and his team when they step on field. Both these nations have specialist players for the shortest format of the game who are globetrotters. Playing as key players in every top league of the world, they know what it is like to win the title. England versus West Indies will be telecasted on Star Sports network and streamed on Hotstar from 7:30 PM.ENG vs WI Preview: Likely Playing XIs, Key Battles, Head to Head and Other Things You Need To Know About T20 World Cup 2021 Match 14

Jos Butler scored a 51 ball 73 in the previous game and his range of shorts makes him England’s standout performer with the bat. Ben Stokes is a huge miss for the team but Liam Livingstone is a an adept replacement in the middle order. Eoin Morgan had a poor IPL with the bat but can contribute with some quick fire runs towards the late stages of the game.

Hayden Walsh Jr has been like a breath of fresh air for West Indies cricket with a knack of picking up key wickets. Conditions in Dubai will suit his bowling and he has an important role to play in the first six overs. Chris Gayle’s form is a worry but the legendary batsman is still somewhat of an automatic pick in the playing eleven. Andre Russell and Kieron Pollard, two of the best all-rounders of the format give West Indies a real edge.ENG vs WI ICC T20 World Cup 2021 Super 12 Dream11 Team Selection: Recommended Players As Captain and Vice-Captain, Probable Line-up To Pick Your Fantasy XI

West Indies have defeated England in all of the five matches they have played at the T20 World Cups and the trend is likely going to continue.

England vs West Indies clash in Group 1 of ICC T20 World Cup 2021 Super 12 stage will be played at the Dubai International Stadium in Dubai on October 23, 2021 (Saturday). The game has a scheduled start time of 07:30 pm IST (Indian Standard Time).

Star Sports are the official broadcasters of T20 World Cup 2021 in India and will be telecasting the games live on its channels, Fans can tune into Star Sports channels to watch England vs West Indies match telecast on their TV sets.

Disney+ Hotstar, the official OTT platform, will provide the live streaming of T20 World Cup 2021 on online platforms in India. Fans can tune into the Disney+ Hotstar app and website to watch England vs West Indies match online.

(The above story first appeared on LatestLY on Oct 23, 2021 06:17 PM IST. For more news and updates on politics, world, sports, entertainment and lifestyle, log on to our website latestly.com).