Charismatic England batter Jos Buttler could replace Eoin Morgan as skipper of the white-ball side as the latter is pondering international retirement, a report in The Guardian has said. 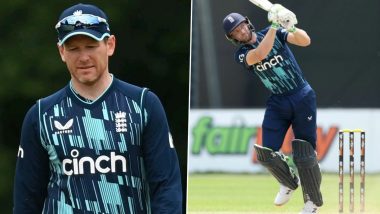 London, June 27 : Charismatic England batter Jos Buttler could replace Eoin Morgan as skipper of the white-ball side as the latter is pondering international retirement, a report in The Guardian has said. The 35-year-old Morgan, credited with transforming England's white-ball side in his time as skipper, has made a solitary century since his side won the World Cup in 2019, and failed miserably in the two ODIs he played against the Netherlands at Amstelveen recently. Eoin Morgan, England Limited-Overs Captain, Pondering International Retirement Due to Form and Fitness Issues: Report.

Buttler, on the other hand, after emerging the highest run-getter in IPL 2022 and guiding Rajasthan Royals into the final, was in smashing form against the Dutch in the series as he scored an unbeaten 162 (70 balls) in the world-record score of 498 in the opening game. "Should Morgan call time on one or both formats, the expectation is that Jos Buttler would step up as captain, having been vice-captain since 2015 and led the team 13 times. Moeen Ali, another to deputise in recent times, would also be a candidate," the report said. IND vs ENG, 5th Test: India Not in a Hurry To Name Stand-In Captain in Place of Rohit Sharma.

Morgan's run of below-par scores has extended since England won the 50-over World Cup at home defeating New Zealand. He has scored just one half-century in 26 innings since August 2020 across both limited-over formats, while since the World Cup title run in 2019, he has scored just one century, that too against Ireland. Recently, ahead of the series against the Netherlands, Morgan had spoken to Sky Sports about his struggles. "If I don't think I am good enough or I don't feel I am contributing to the team, then I will finish," he had said.

(The above story first appeared on LatestLY on Jun 27, 2022 12:56 PM IST. For more news and updates on politics, world, sports, entertainment and lifestyle, log on to our website latestly.com).