Cricketers past and present took to social media to pay glowing tributes to former England white-ball skipper Eoin Morgan who announced his international retirement on Tuesday, with Indian legend Sachin Tendulkar congratulating the World Cup-winning captain on a wonderful career. 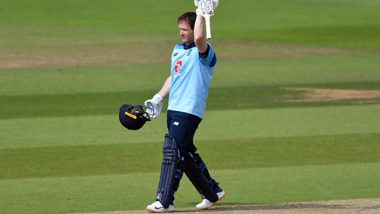 London, June 29 : Cricketers past and present took to social media to pay glowing tributes to former England white-ball skipper Eoin Morgan who announced his international retirement on Tuesday, with Indian legend Sachin Tendulkar congratulating the World Cup-winning captain on a wonderful career. Morgan called time on his 16-year international career on Tuesday, saying, "After careful deliberation and consideration, I am here to announce my retirement from international cricket with immediate effect." Having made his debut for Ireland in 2006, Morgan went on to play for England and retired as one of their greatest white-ball players. Eoin Morgan Retires: England's 2019 World Cup Winning Captain Announces Retirement.

"Congratulations on a wonderful career, @Eoin16. You gave cricket fans several moments to cherish. Best wishes to you. May your 2nd innings be as successful as the first," tweeted Tendulkar. Morgan's teammate on several campaigns, Jos Buttler, who is likely to take over the role of white-ball skipper, posted several images of winning moments with Morgan and tweeted, "Captain leader legend. Thanks for everything boss." Morgan retired as England's leading run-scorer in ODIs, as well as their most successful captain in 50-over cricket. In 225 ODIs, the southpaw scored 6,957 runs in 225 ODIs for England, including 13 centuries. Before playing for England, Morgan represented Ireland as well, where he scored 744 runs in 23 matches at an average of 35.42. Former Australia quick Jason Gillespie termed Morgan a selfless leader. "Hats off, Morgan has been immense for England. Team always comes first. A selfless leader." Jos Buttler Appointed As England's Limited-Overs Skipper.

Pakistan cricketer Mohammad Hafeez tweeted, "Congratulations mate on fantastic desirable career. To me u are game changer for @ECB_cricket in white ball cricket as captain. Loads of respect for ur services. Real entertainer @Eoin16. cricket world wil miss u. Best wishes for future endeavours. Stay blessed." The 35-year-old Morgan has been credited for bringing about a revolution in white-ball cricket since taking over as England captain in 2015. Under his captaincy, England famously won the 2019 Cricket World Cup in front of their home fans at Lord's. He was also a part of the 2010 England squad that won the T20 World Cup in the Caribbean.

(The above story first appeared on LatestLY on Jun 29, 2022 11:49 AM IST. For more news and updates on politics, world, sports, entertainment and lifestyle, log on to our website latestly.com).