Fakhar Zaman Trolled With Hilarious Memes After his Failed Attempt to Pull off a Scoop Shot During PAK vs SA, CWC 2019

Pakistan is currently playing a die-or-die game against South Africa at the Lord’s in London in the CWC 2019. 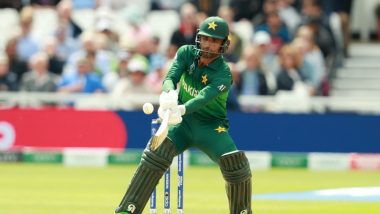 Pakistan is currently playing a die-or-die game against South Africa at the Lord’s in London in the CWC 2019. After winning the toss, Pakistan elected to bat first. Openers Imam-Ul-Haq and Fakhar Zaman gave a good start to the team as they scored 44 runs each. But Zaman landed himself in the eye of the storm as he got dismissed as he tried to play a scoop shot. This surely did not go down well with the netizens and they posted hilarious memes and trolled the Pakistani opener. PAK 195/3 in 37 Overs | Pakistan vs South Africa Live Cricket Score of ICC World Cup 2019 Match: Babar Azam Scores Half- Century.

It was in the 14.5 over that Fakhar Zaman made way to the pavilion when Imran Tahir was handling the bowling duties. Tahir bowled a fuller length delivery and the Pakistani opener looked to play a scoop shot and handed it over to Hashim Amla in the slips. Zaman missed his half-century by six runs and left the stadium in sheer frustration. This angered the netizens who posted hilarious memes on social media to troll the opener.

Check out a few memes below:

Fans : Why you always gets out playing a useless shot, why you are not staying on the crease?

This fan is quite emotional.

After Fakhar zaman out ! pic.twitter.com/TcvofLDqMS

Fakhar zaman choosing shot for getting out : #PAKvSA #CWC19 pic.twitter.com/xVOt3wNrMn

Talking about the match, Pakistan has neared the score of 200 runs and has currently lost three wickets. As of now Babar Azam and Haris Sohail are batting for the team. Azam scored a half-century and Hariz Sohail is batting on 30 runs.

(The above story first appeared on LatestLY on Jun 23, 2019 05:59 PM IST. For more news and updates on politics, world, sports, entertainment and lifestyle, log on to our website latestly.com).