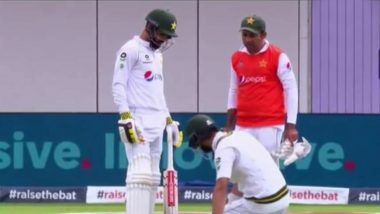 Some great contest between the bat and the ball was witnessed in the first two days of England vs Pakistan 1st Test. Apart from cricket action, however, the match is making headlines for the services of former Pakistan captain Sarfaraz Ahmed. With Mohammad Rizwan donning the wicket-keeping gloves, Sarfaraz didn’t get a place in the playing XI at the Old Trafford in Manchester. However, the 33-year-old bagged a lot of attention when he carried drinks and shoes for his teammates. Many fans weren’t amused seeing the veteran wicket-keeper playing the role of ‘waterboy’ as they to social media and lashed out at the Pakistan team management. Pakistan vs England Live Score 1st Test Day 3.

Sarfaraz, who played his last international match back in October 2019, was terminated as the skipper of the national team in all three formats and was also dropped from the squad. He  made a comeback in the ongoing series but didn’t get to play the first match and just like regular benched players, the wicket-keeper was seen carrying the drinks for Shan Masood. This was, however, not the first time when senior a player has played the role of ‘water boy.’ The likes of Ricky Ponting, David Warner and Virat Kohli have also carried drinks for their teammates. However, netizens weren’t impressed seeing Ahmed in the role as they heavily criticized Misbah-ul-Haq and others support staff. Shan Masood Becomes First Pakistan Opener to Score a Test Century in England Since Saeed Anwar in 1996.

Very hard too see former Pakistani Captain in this situation

Safi Bhai love you , you are a true leader#SarfarazAhmed pic.twitter.com/03Yt4AvtxU

This is Shameful He has won Champions trophy #SarfarazAhmed pic.twitter.com/aBh8OmiVjX

#SarfarazAhmed is bringing shoes and water for players in #PAKvENG test series. Team management must maintain protocol for the senior players and show some respect. This is totally unfair. They have so many juniors in the 16 member team but still this. Shame on such attitude. pic.twitter.com/SVxLnuThDv

Shame on you @TheRealPCBMedia @waqyounis99 @YounusK75 @captainmisbahpk @Mushy_online from being so pathetic... the gesture u guys sent to world by putting sarfaraz ahmed as a 12th man and bring water and shoes on the field whereas as he should be in playing 11

Coming to the game, Pakistan are well placed on the driver’s seat after the first two days. Courtesy a sensational century by Shan Masood (156) and a crucial fifty by Babar Azam (69), the visitors posted 326 runs while batting first. In reply, the Pakistan pacers breathed fire with the new ball and rattled England’s top order. However, Ollie Pope and Jos Buttler did some repair work as England ended day 2 at 92/4, still trailing by 234 runs.

(The above story first appeared on LatestLY on Aug 07, 2020 03:23 PM IST. For more news and updates on politics, world, sports, entertainment and lifestyle, log on to our website latestly.com).