Shan Masood Becomes First Pakistan Opener to Score a Test Century in England Since Saeed Anwar in 1996, Registers his Fourth in Tests 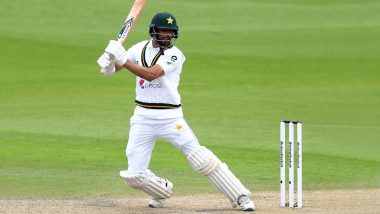 Shan Masood showcased great resilience against James Anderson and Co during England vs Pakistan 1st Test and registered his 4th Test century.  The English pacers were breathing fire with the cherry at the Old Trafford in Manchester but no one was able to pierce the defences of Masood as the southpaw scored a scintillating ton.  The 30-year-old wasn’t very aggressive during the course of his knock. However, he didn't put a foot wrong despite losing partners at the other end. Notably,  this was Masood's third Test consecutive century in the longest format of the game.  Also, he became the first Pakistan opener to score a Test century on England soil since Saeed Anwar in 1996.  Pakistan vs England Live Score Updates of 1st Test Day 2.

Earlier in the game, Pakistan skipper Azhar Ali won the toss and elected to bat first. Pakistan openers Shaan Masood and Abid Ali were watchful at the start before the latter fell prey to Jofra Archer for 16. Problems for the visitors were increased when skipper Azhar Ali was dismissed for a duck by Chris Woakes. However, Babar Azam joined forces with Shan Masood and the duo made sure that no more damage is done in the remaining part of the day. Virat Kohli vs Babar Azam: Pakistan Star’s Brilliant Half-Century vs England Ignites ‘Best Batsman’ Debate.

After Azam got dismissed for 69, the visitors lost two quick wickets in the form of Asad Shafiq and Mohammad Rizwan. However, Masood got the support of all-rounder Shadab Khan and the duo are eyeing to guide Pakistan to a massive first-innings total. So far, the visitors have crossed the 250-run mark but Masood needs to stay at the crease for some more time in order to put his on a commanding position.

(The above story first appeared on LatestLY on Aug 06, 2020 07:02 PM IST. For more news and updates on politics, world, sports, entertainment and lifestyle, log on to our website latestly.com).