Head of the International Cricket Council (ICC) Greg Barclay on Saturday painted a grim picture of Test cricket, saying there will be fewer five-day games played annually, and that he doesn't foresee women's Tests to "be part of the landscape moving forward". 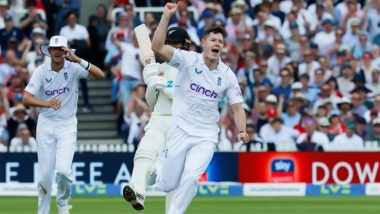 Melbourne, June 4 : Head of the International Cricket Council (ICC) Greg Barclay on Saturday painted a grim picture of Test cricket, saying there will be fewer five-day games played annually, and that he doesn't foresee women's Tests to "be part of the landscape moving forward". The New Zealander added that there's precious little the cricket's global governing body can do as ICC's events and T20 leagues across the world crowd the calendar. Mondli Khumalo, South African Cricketer, Out of Coma After Bring Assaulted in England.

Barclay, who assumed charge of the ICC in 2020, admitted that with domestic tournaments, such as the Indian Premier League (IPL) set to dominate the international calendar, bilateral cricket will get "squeezed" as a consequence, cricket.com.au quoted the BBC as saying. "The single biggest issue that we've got in front of us now is we're creating the cycle for the next eight years (and) just fitting everything that we've got into that into that calendar," Barclay told BBC during the ongoing Test between England and New Zealand.

"And I think there'll be some unfortunate consequences from a playing experience point of view and in a revenue generation perspective for some of these countries who just won't get the amount of cricket that they will hope to have," said Barclay. The New Zealander also indicated that arranging series with the top-three cricket-playing nations -- India, England and Australia -- will get increasingly difficult with time. Nasser Hussain Advises To Get More Variety, Extra Pace and High-Quality Spin in England Bowling.

"And they (cricket-playing countries outside the top-3) won't get exposure against, particularly, India and to a lesser extent Australia and England," he opined. Barclay said that while he appreciated Test cricket's legacy and history, he added that the longest format of the game was costing nations money. "We're fortunate in some respects that we've got other forms of the game that can help us sustain, particularly financially, Test cricket because, with the exception maybe of one or two series, it is effectively loss making for member boards," Barclay said.

"It may well be that there's less Test cricket, and some countries will just have to make room and play less Test cricket. Maybe some of those countries will have totally different long-form and short-form squads, and we can see that happening already. "But I think also some of the smaller full members will have to accept that from a resourcing point of view that they're just not going to be able to play the amount of Test cricket that they wanted to. So I think we'll see a lessening of that, four or five Tests a year maybe. Whereas England, Australia, India, I think they'll be playing Test cricket like they are now. It's only one man's opinion but I think that that's how will it play out," he was quoted as saying.

(The above story first appeared on LatestLY on Jun 04, 2022 01:33 PM IST. For more news and updates on politics, world, sports, entertainment and lifestyle, log on to our website latestly.com).