GT vs MI Preview: Likely Playing XIs, Key Battles, Head to Head and Other Things You Need To Know About TATA IPL 2022 Match 51 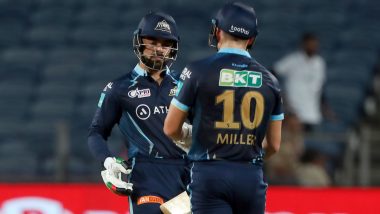 It is a battle of table-toppers and bottom-placed teams in the Indian Premier League (IPL) 2022 as Gujarat Titans (GT) take on Mumbai Indians (MI). While Gujarat Titans, the newcomers, are placed on top of the IPL 2022 points table, Mumbai Indians are languishing at the bottom of the teams standings and are out of playoffs contention. Meanwhile, ahead of the IPL 2022 encounter, we bring you GT vs MI head-to-head, likely playing XI and other things you need to know. IPL 2022 Playoffs Qualification Scenario Explained.

Gujarat Titans need a win to make it to the IPL 2022 playoffs but after maintaining a winning streak of five matches, the Hardik Pandya-led side lost to Punjab Kings (PBKS) in their last game. Mumbai Indians, interestingly, lost eight consecutive matches but found victory in their last encounter. The former champions, with nothing to lose, will now be looking to pick another win and further dent the table-toppers.

Suryakumar Yadav and Jasprit Bumrah will be the key players from the Mumbai Indians camp to watch out for. In Gujarat Titans camp, all eyes will be on Hardik Pandya as he turns up against his former side and David Miller.

In the GT vs MI game, Rashid Khan vs Rohit Sharma will be an interesting battle to watch apart from Jasprit Bumrah vs Shubman Gill.

(The above story first appeared on LatestLY on May 05, 2022 01:32 PM IST. For more news and updates on politics, world, sports, entertainment and lifestyle, log on to our website latestly.com).