Mayank Agarwal's men recovered from a defeat to Lucknow Super Giants as they completely outplayed table-toppers Gujarat Titans by eight wickets. Gujarat on the other hand, suffered their only second loss in 10 matches so far. 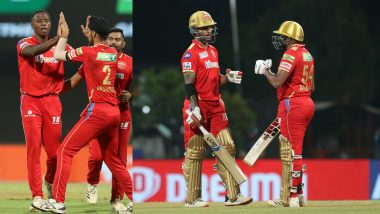 Shikhar Dhawan (62* off 53 deliveries) guided a 144-run chase with a half-century and Liam Livingstone provided the finishing touches as Punjab Kings returned to winning ways with an impressive eight-wicket victory over Gujarat Titans in IPL 2022 on Tuesday, May 3. Dhawan and Bhanuka Rajapaksa (40) stitched an 87-run stand that put the result in their favour before Livingstone came out all guns blazing to score 30 runs off 10 deliveries and seal the win for his side. One of his three sixes included a monstrous 117m one, the biggest in the IPL this year as Punjab won with four overs to spare. Punjab Kings had a change in their batting order tonight with skipper Mayank Agarwal dropping himself down the order and having Jonny Bairstow open the innings. Liam Livingstone Hits 117m Six During GT vs PBKS Clash in IPL 2022

But it was Kagiso Rabada (4/33), who set the tone for this win with his second-successive four-wicket haul this season, as he and the other Punjab bowlers restricted Gujarat Titans to only 143/8. Arshdeep Singh (1/36), Rishi Dhawan (1/26) and Liam Livingstone (1/15) were clinical for Punjab with the ball. Punjab Kings thus returned to winning ways after being outplayed by newcomers Lucknow Super Giants in their last game. For Gujarat though, it was a second defeat this season in 10 games.

Earlier, Hardik Pandya won the toss and chose to bat first. But his decision proved to backfire as Gujarat Titans batters never really got going. Shubman Gill was the first to fall, as he was run out courtesy of a brilliant piece of fielding by Rishi Dhawan. Wickets kept falling as their innings never gained any sort of momentum. Sai Sudharsan battled like a lone ranger with 65 undefeated runs off 50 deliveries, with his maiden IPL fifty helping the team get to a decent total.

#Dhawan completed 300 runs in an IPL season for the 13th time.

Punjab Kings will look forward to maintaining this momentum when they face Rajasthan Royals next on May 7. Gujarat Titans on the other hand, will aim to bounce back from this defeat when they go up against Mumbai Indians on May 6.

(The above story first appeared on LatestLY on May 03, 2022 11:57 PM IST. For more news and updates on politics, world, sports, entertainment and lifestyle, log on to our website latestly.com).