The IPL debutants raised their performance by another notch as David Miller showed why he is still one of the best finishers around with an emphatic win over Rajasthan Royals. They thus earned their ticket to the IPL final in just their debut season. Earlier, Jos Buttler scored 89 to help his side get to 188/6. 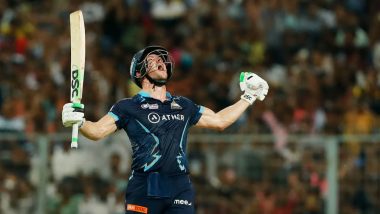 David Miller turned up just when his team needed him. Not having much success in the past few seasons, Miller was under a lot of pressure coming into this edition of the IPL. And he seemed to find new confidence and his old identity back as he struck a sensational 68 off just 38 balls to help Gujarat Titans book their ticket to Ahmedabad for the IPL 2022 final with a win over Rajasthan Royals. Courtesy of his effort, Gujarat overhauled a 189-run target with three balls to spare. Rajasthan Royals, on the other hand, were spurred on by Jos Buttler's 89 in the first innings but some ordinary bowling led to their defeat as they now look up to Qualifier 2. The South African's emphatic roar amidst the deafening crowd has surely got to be one of the most memorable moments of the season!  Gujarat Titans Enter IPL 2022 Final With Thrilling Seven-Wicket Win Over Rajasthan Royals in IPL 2022 Qualifier 1

A 189-run target is always a huge one considering the magnitude of the match being a qualifier. But Gujarat batters exuded confidence. Despite losing an in-form Wriddhiman Saha on the second ball, Gujarat made the most of their powerplay. Shubman Gill (35) and Matthew Wade (35) set up the chase wonderfully with a 72 run stand off 44 deliveries and later, an unbeaten partnership yielding 106 runs between Hardik Pandya (40*) and Miller (68*) was all that the Titans needed to earn an opportunity of playing at their home ground in an IPL final. Skipper Hardik was calm throughout the chase and his presence and calmness was appreciable as well.

Congratulations to the @gujarat_titans as they march into the Final in their maiden IPL season! 👏 👏

Stunning performance by @hardikpandya7 & Co to beat #RR by 7⃣ wickets in Qualifier 1 at the Eden Gardens, Kolkata. 🙌 🙌

On the contrary, Rajasthan bowlers had a poor day on the field. The spin duo of Ravi Ashwin (0/40) and Yuzvendra Chahal (0/32) were all over the place and so were the pace bowlers. Barring Trent Boult (1/38), no one looked to be threatening. Prasidh Krishna conceded 40 runs in 3.3 overs while Obed McCoy was far from his best.

Earlier, Rajasthan Royals were sent to bat first by Gujarat Titans. Buttler started off pretty slow and his innings was of two halves. Initially, he found it difficult to get going as he managed to score 39 off 38 deliveries. But once he got going, the right-hander unleashed an array of powerful shots and aided with lots of luck, he managed to score the next 50 off just 18 deliveries. Skipper Sanju Samson sent a message to the national selectors with 47 runs off just 26 balls with three sixes and five fours. The best part of his knock was the effortlessness with which he played the knock. Debdutt Padikkal contributed 28 off 20 deliveries.

#He also scored his 15th IPl fifty. fourth of the season.

All action now turns to Qualifier 2 when Lucknow Super Giants face Royal Challengers Bangalore at the same venue on May 25.

(The above story first appeared on LatestLY on May 25, 2022 12:09 AM IST. For more news and updates on politics, world, sports, entertainment and lifestyle, log on to our website latestly.com).