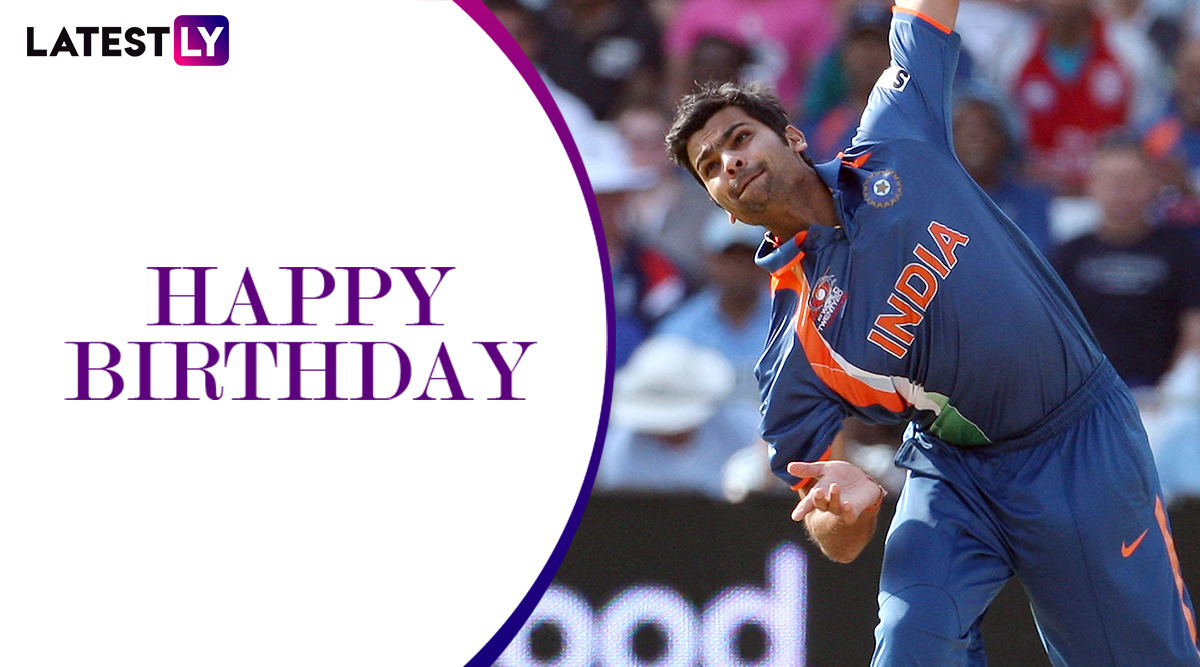 Former Indian pacer Rudra Pratap Singh, commonly known as RP Singh turns 34 on Friday. Born on December 6, 1985, the cricketer was a lethal left-arm fast bowler who has guided India to many victories. Singh had the ability to swing the new ball both ways and his bucket of variations made him a force to reckon with.  The pacer was India’s leading wicket-taker in the ICC T20 World Cup 2007 where he scalped 12 wickets in seven matches and was the unsung hero of his side's triumph in the showpiece tournament. He has also proved his mettle in Indian Premier League (IPL) where he won the purple-cap in the 2009 edition. Irfan Pathan, VVS Laxman, RP Singh and Jatin Sapru Celebrate Gauti’s 38th B-Day in Style!

The speedster made his international debut in an ODI clash in September 2005. Singh didn’t had a very long career but was able to make a mark in the matches he played. Speaking of his career, the pacer had 40 wickets in 14 Tests which also comprised a five-wicket haul. In ODIs, Singh played 58 matches where he scalped 69 wickets. He also had 15 wickets in 11 T20I outings. Talking about the bowling ability of RP Singh, let’s look at five of the best spells by the former Indian pacer.

5/59 Against England in Lords

The left-arm bowler delivered a sensational spell in the opening Test of India’s 2007 Tour of England. In the third innings of the match, Singh made an impeccable use of the semi-new ball and ran through England's middle-order. He dismissed the likes of Kevin Pietersen and Michael Vaughan and went on to claim a five-wicket haul. His efforts restricted England to 282 runs and the match resulted in a draw.

4/35 Against Sri Lanka in Rajkot

Playing just his 3rd international match, Singh delivered an inspired spell in the sixth ODI of Sri Lanka’s 2005 Tour of India. He breathed fire throughout the match and never let the visitors to settle down in the pitch. He dismissed the likes of Upul Tharanga and Marvan Atapattu and put his side on the driver’s seat. As a result, Lankans were bundled out for 196 runs in the first innings and later lost the match by seven wickets.

4/13 Against South Africa in Durban

Singh was the spearhead of the Indian pace attack in the ICC T20 World Cup in Durban. In a do or die encounter India posted mere 153 runs in the first innings and needed to restrict the Proteas under 126 runs in order to go through the semi-finals. The task looked a jolting one. However, the pacer looked like a man on a mission and bowled a breath-taking spell. He just dried up the run-flow but also took regular wickets. His brilliance proved to be fruitful as the hosts could only manage 116 runs and the Men in Blue advanced to the knock-outs.

As mentioned above, Singh was the leading wicket-taker in IPL 2009. One of his best performances in the tournament came against the Kolkata Knight Riders (KKR). Playing for Deccan Chargers (Now Sunrisers Hyderabad), Singh showed a fantastic display of fast-bowling and scalped four wickets. The KKR batsmen looked completely clueless against the bowler and were packed for 101 runs in first innings and subsequently lost the match by nine wickets.

Singh bid adieu to all forms of cricket in September 2018. Post-retirement, the Rai Bareli-born cricketer donned the commentator’s hat and is seen giving his voice in many matches. He is also expected to be the part of expert’s panel in the upcoming West Indies’ 2019 Tour of India.