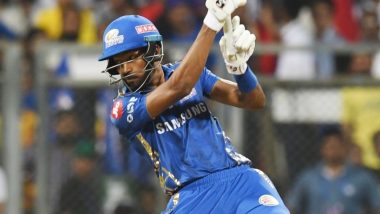 A couple of days ago, Mumbai Indians played against the Sunrisers Hyderabad at the Wankhede Stadium in Mumbai, where the hosts walked away with three balls to spare in the super over. The visitors chased a total of 162 runs and equalled the scored on the last ball. Then obviously came the Super Over where SRH posted eight runs on the board. Hardik Pandya took to team to the finishing line, with that one six. Apart from his performance, Hardik Pandya stole the show for his antics while sitting in the dugout. MI tied with SRH (MI win Super Over by 2 wickets)

Pandya had padded up and was waiting for his chance to bat. The all-rounder was also seen munching on a bar of chocolate and just then a player from Sunrisers Hyderabad went past him. Pandya happened to offer a bar of chocolate to the player and the player denied it. Pandya acknowledged the act with a nod and the moment was captured on the cameras and was further shared on social media. The video got many views and was shared further by the fan pages. Yuvraj Singh Expecting Special Performances From Hardik Pandya in ICC Cricket World Cup 2019.

With this, Mumbai Indians not only won the game but also qualified for the playoffs and rose to the number two spot on the IPL 2019 points table with 16 points in their kitty. CSK still stands on number one and DC now is placed on number three.

(The above story first appeared on LatestLY on May 04, 2019 09:27 AM IST. For more news and updates on politics, world, sports, entertainment and lifestyle, log on to our website latestly.com).