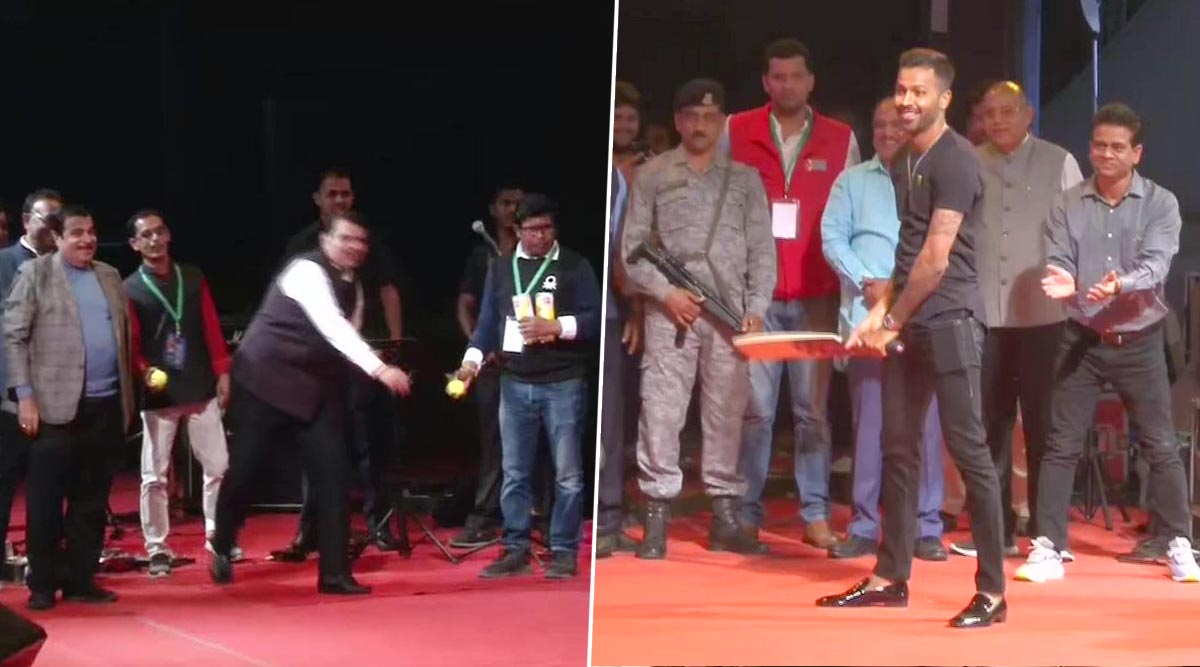 Indian all-rounder Hardik Pandya has been out of the national team action for quite some time now as he is recovering from a back injury but has been active on various fronts. The 26-year-old was recently seen at ‘Khasdar Krida Mahotsav’ in Nagpur where he met union minister Nitin Gadkari and former Maharashtra chief minister Devendra Fadnavis. Hardik Pandya surely enjoyed his time at the annual sports event as he played cricket with the two senior BJP leaders. Pandya was last seen playing for India in September 2019 during a T20I clash with South Africa. Hardik Pandya Shares Adorable Photo With Fiancee Natasa Stankovic.

Hardik Pandya has been enjoying his time away from cricket as the all-rounder was spotted at a grassroots level multi-sports event in Nagpur where he engaged in a game of cricket with union minister and Nagpur MP Nitin Gadkari and former Maharashtra CM Devendra Fadnavis. The third season of the ‘Khasdar Krida Mahotsav’ kicked off on January 12, 2020. It is an initiative started by Mr Nitin Gadkari which provides a platform for fitness enthusiasts and amateur sportsperson from the country to showcase their talent in a competition format. The event –with the tagline ‘Khelo Nagpur Khelo’ – comprising of 32 games was held at different venues across the city and it included sports such as cricket, cycling, athletics, gymnastics, lawn tennis, archery, rifle shooting, badminton, wrestling and many others. The competition was open for both boys and girls under different age categories including the under-12, under-15 and under-18. Hardik Pandya Shares Exercise Video on Instagram, All-Rounder Hints at Return to International Cricket.

Speaking of Hardik Pandya, there were a lot of speculations of whether the all-rounder will join India for the tour of New Zealand but he was not included in the squad after failing a late fitness test. The 26-year-old was asked by the Indian cricket management to complete his rehab at the NCA under the watchful eyes of Rahul Dravid and he might be available for the upcoming ODI series against South Africa in March 2020 at home.