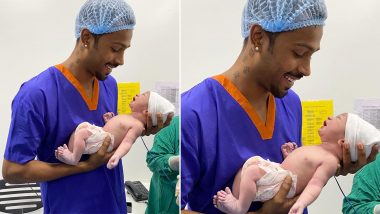 Hardik Pandya announced on Thursday (July 30, 2020) that he became a dad after wife Natasa Stankovic gave birth to the couple’s first child. The Indian all-rounder took to social media to share the news with his fans. ‘We are blessed with our baby boy’ wrote the 26-year as he shared a photo while holding the hands of his new-born kid. The cricketer recently posted a new picture of him and his baby boyHardik Pandya's Son First Pic Out: Team India All-Rounder and Nataša Stanković Become Proud Parents of Baby Boy!

The Indian all-rounder took to social media to share an adorable photo with his child while holding him at the hospital. ‘The blessing by the god’ the Indian all-rounder captioned the post in which he also tagged new mum Natasa Stankovic. Hardik Pandya and Natasa Stankovic's Baby Boy Is Welcomed by Netizens with Funny Memes and Jokes Along with Warm Blessings and Heartfelt Messages!

The blessing from God 🙏🏾❤️ @natasastankovic__

Hardik Pandya is certainly enjoying the responsibilities of being a new dad as the Mumbai Indians all-rounder recently shared a photo of him while shopping for baby diapers. ‘‘Baby's diapers are on the way’ the cricketer captioned his picture in which he could be seen sitting in the driver's seat while the diapers were kept in the back. Hardik Pandya Begins Dad Duties, Goes Shopping for Baby Diapers, Tags New Mum Nataša Stanković in This Cute Instagram Story! (See Photo).

Hardik Pandya and Natasa Stankovic shocked the world when they announced their engagement in New Year’s Day 2020. The Indian cricketer proposed the Serbian actress on a yacht by going down on one knee and the couple got married during the lockdown.

Hardik Pandya has not played international cricket since November 2019 due to a back injury. But will return to in-field action when Mumbai Indians start their title defence in the latest edition of Indian Premier League. IPL 2020 is scheduled to start in September in UAE.

(The above story first appeared on LatestLY on Aug 01, 2020 10:25 AM IST. For more news and updates on politics, world, sports, entertainment and lifestyle, log on to our website latestly.com).