In the picture, both Hardik Pandya and Umesh Yadav can be seen flaunting their abs as they posed for pics post the practice session. “Hustle continues,” Hardik captioned the post. Hardik and Umesh Yadav are aiming to make their return to the Indian Test team after not being picked for the first two Test matches for the series. 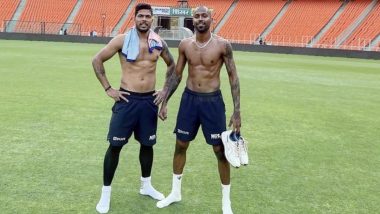 Hardik Pandya is training hard to make his return to the Indian Test team ahead of the IND vs ENG pink-ball Test match at the Motera Stadium in Ahmedabad. Pandya last played a Test for India in 2018 during India’s tour of England. Since then he has been troubled by injuries and is yet to fully recover. On February 21 (Sunday), Pandya took to social media to share another picture from the training session. He was joined by Umesh Yadav, who also made his return into the Indian Test squad for the third and fourth Test of the England series after recovering from a calf injury. Ravi Ashwin, Hardik Pandya and Kuldeep Yadav Groove to Popular Song 'Vaathi Coming' From Tamil Movie Master (Watch Video).

Umesh suffered the injury during the India vs Australia Test at Melbourne and had to leave the side. He was not picked for the opening two Test matches against England as he was recuperating from the injury. In the picture, both Hardik and Umesh can be seen flaunting their abs as they posed for pics post the practice session. “Hustle continues,” Hardik captioned the post. Take a look at his post on Twitter. Hardik Pandya Mesmerised by Beautiful View of Motera Stadium, Says ‘It Feels Surreal’ After Stepping Into the 1 Lakh Sitter (See Post).

Pandya and Umesh will be up for selection as India aim to complete a Test series win against England. India and England are currently tied 1-1 in the four-match Test series. The visitors started the series with a 227-run win in the first Test before India bounced back in the series with a 317-run victory in the same venue. The third Test will be a day-night affair and will be played at the newly revamped Motera Stadium. The Sardar Patel Stadium is now the world’s largest cricket stadium and can accommodate up to 1, 10, 000 fans.

Apart from the pink ball Test, Motera will also host the fourth and final Test of the series as well as the five-T20I series which will follow the Test leg of the tour.

(The above story first appeared on LatestLY on Feb 21, 2021 08:22 PM IST. For more news and updates on politics, world, sports, entertainment and lifestyle, log on to our website latestly.com).