From seventh on the points table after the Indian leg of IPL 2021 to entering the final of the competition much against everyone's expectations--KKR came a long way in determining their fate and setting a bold example of not putting an end to having belief in one's own abilities. 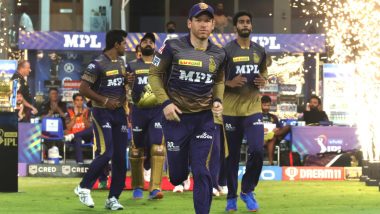 KKR players walk out to field during the final against CSK (Photo credit: Twitter)

While talking to presenters at the end of the IPL 2021 final, Chennai Super Kings captain Mahendra Singh Dhoni said, "Before I start talking about CSK, need to talk about KKR. Difficult to come back and do what they have, if any team deserved to win the IPL, it's KKR. Huge credit to the coaches, team and support staff. The break really helped them." Shows how much a team has done to earn plaudits from a T20 titan who just led his side to IPL glory for the fourth time. If you followed IPL on TV or through live stream, you would get the idea of KKR's comeback being talked about regularly as they made their way to the IPL 2021 final. And what they did was no fluke. Here is how things panned out for them in the India leg of IPL 2021. CSK Win IPL 2021: See How Netizens Reacted to MS Dhoni’s Yellow Army Clinching Fourth Title With Victory Over KKR in Summit Clash

They had a winning start to their campaign against Sunrisers Hyderabad but lost out on that fizz soon with four consecutive losses. They did win against Punjab Kings but faced a defeat to Delhi Capitals, which marked their end to the Indian leg of IPL 2021. Seven matches, two wins and five losses and a seventh position on the league table. Everyone had written them off apart from the KKR loyalists and well, it was predicted that they would finish in the bottom half of the points table.

All of it was  going according to speculations and expectations until the UAE leg started. That is where the Brendon McCullum infused-DNA finally began to show in the way they approached the game. Yes, the inclusion of Venkatesh Iyer did prove to be masterstroke but what took everyone by storm was the way they played. Fearlessness, ruthlessness and a collective spirit were the intrinsic characteristics of the way they played and well, it paid off big time. Keeping the defending champions out of the playoffs, beating two out of the top three teams and making it to the final--it was a turnaround for ages. In the UAE leg, Kolkata lost just two out of seven matches in the group stage, made it to the final and developed a style of play, partly central to which was Sharjah and won matches convincingly. CSK vs KKR, IPL 2021 Final Stat Highlights: MS Dhoni’s Chennai Super Kings Win IPL Trophy for Fourth Time, Beat Eoin Morgan’s Men by 27 Runs

This dramatic turnaround (out of nowhere) has truly turned out to be an example for other sides. Ravichandran Ashwin mentioned it while congratulating Chennai for winning the title. It drew praise from all quarters and even Dhoni could not resist mentioning them after the final. KKR players were heartbroken to have missed out on a third IPL trophy, but hey, they rewrote history, possibly scripting a turnaround to be remembered for a very long time to come.  Expectedly, every team would now never stop believing in themselves even when everything is not going according to plan. KKR never stopped trusting themselves and their abilities and it paid  off big time.

These same bunch of players might not be around next year with the mega auctions coming up but their fightback story would go down in IPL folklore as one of the best there has ever been in the competition. Cheers to Eoin Morgan and coach McCullum for that!

(The above story first appeared on LatestLY on Oct 16, 2021 10:22 PM IST. For more news and updates on politics, world, sports, entertainment and lifestyle, log on to our website latestly.com).