Oman is one of 16 participating nations at this year's T20 World Cup and cricket in the country is run entirely by a business conglomerate, Khimji Ramdas, which is an Indian-origin business family. Jesrani said both the grounds are inside Muscat. 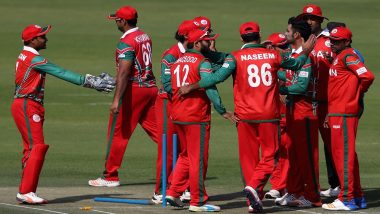 New Delhi, June 5: International Cricket Council (ICC) and the Board of Control for Cricket in India (BCCI) are in talks with Oman Cricket over hosting of some of the T20 World Cup matches later this year in the gulf nation, a top Oman Cricket official has confirmed.

The ICC had, earlier this week, given BCCI a month's time to show its readiness to host the tournament in October-November. With India's chances to host it unlikely due to an expected third wave of Covid-19 pandemic, and things not improving drastically over the last few days, the world body has started to look at a venue besides United Arab Emirates (UAE) which is already on standby.

"We have been approached by ICC and the chairman of Oman Cricket, Pankaj Khimji, is in talks with the BCCI which is due to host the tournament," Madhu Jesrani, the Oman Cricket secretary, told IANS from Muscat, the capital of the country. Rashid Khan on Declining Afghanistan T20I Captaincy, Says I'm Better Off as Player Than Leader.

"The talks with BCCI have just started. The ICC asked us for certain things that they are looking at in a hosting venue and we have given them the details. We have told them that we are ready. We have two turf pitch grounds, including one with floodlights," added Jesrani.

Oman is one of 16 participating nations at this year's T20 World Cup and cricket in the country is run entirely by a business conglomerate, Khimji Ramdas, which is an Indian-origin business family. Jesrani said both the grounds are inside Muscat.

"The Al Amerat Cricket Stadium has floodlights and it is 15-20 km from the airport," he added. The ground was established in 2012 and has hosted ICC's lower-division matches.

The BCCI has already announced that the remaining Indian Premier League (IPL) matches will be held in the UAE from mid-September to mid-October, which is the time when the T20 World Cup will start.

While there are concerns the pitches at the three UAE venues won't last two tournaments (76 matches in total), the burden would be eased by shifting some games to another country like Oman. ICC T20 World Cup 2021: Final Decision on the Venue For T20 World Cup Will Be Taken Later This Month, Says ICC.

On Tuesday, the ICC issued a statement saying, "The ICC Board has requested management [to] focus its planning efforts for the ICC Men's T20 World Cup 2021 on the event being staged in the UAE with the possibility of including another venue in the Middle East." Jesrani says they will wait until June 28 when ICC's deadline to BCCI expires.

"We are waiting till June 28 when the ICC deadline ends and a final decision will be made," he said.

(The above story first appeared on LatestLY on Jun 05, 2021 09:31 PM IST. For more news and updates on politics, world, sports, entertainment and lifestyle, log on to our website latestly.com).