Like all things related to sports, there are no easy answers here. But certainly, the reason for this worrisome tendency among the batsmen and teams can be charted through the growth of T20 Cricket in the past five years. 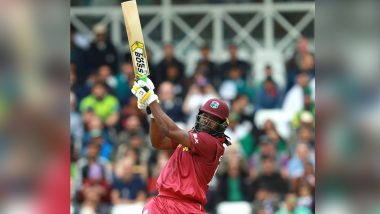 Fans are getting to see a strange phenomena in the ongoing ICC Cricket World Cup 2019. Out of the four matches played so far in ICC CWC 2019 in England & Wales, only once has it happened that the team batting first has managed to bat through the 50 overs. And though it might still be the early stages of the  tournament, this trend leads us to question whether it is the effect of T20 Internationals on batsmen that leads them to believe that it is more important to hit fours and sixes rather than play through the 50 overs? ICC Cricket World Cup 2019 Schedule in IST, Free PDF Download: Full Timetable of CWC19 Fixtures With Match Timings and Venue Details.

Like all things related to sports, there are no easy answers here. But certainly, the reason for this worrisome tendency among the batsmen and teams can be charted through the growth of T20 Cricket in the past five years.

In match one of the ICC Cricket World Cup 2019, England set a total of 311/8 in 50 overs against South Africa. In reply, South Africa were bundled out for 207 in 39.5 overs. In the second match of the tournament, Pakistan were bowled out for 105 against West Indies in 21.4 overs. West Indies in reply scored the run in just 13.4 overs for loss of 3 wickets.

The point here is that the batsmen in teams batting first are looking to hit the ball over the boundary lines a bit too often for their own good. After all, isn't ODIs supposed to be a breed or bridge between the good old Test and glittering new T20s? It's seen quite often in the past one year or so that the best ODI matches have been the ones where batsmen have had to work hard for runs and then catch on scoring rate rather than playing a brash cameo that amounts to nothing in the context of the match.

One wonders if the low totals in first innings in this World Cup so far could have been avoided if the T20 league experienced young batsmen in teams preferred to spend some time on the wicket and slog instead of going for the big shots too early and losing their wicket.

The prospect of witnessing a contest between the ball and the bat is what makes a one-day match where a total of 260 runs or say 250 runs being scored and then defended becomes so special. After all, the beauty of a hard fought hundred is much better than a 10 ball 30 runs cameo, with plenty of balls to spare.

West Indies recently hit 421 in the warm-up match against New Zealand, but still could not face the full fifty overs. Young and talented Windies opener Shai Hope recently said that West Indies has the firepower to get to 500 in ODIs before any other team. But no team has said that they would like to play through the 50 overs and achieve the feat. Is it a sign of change or hint of things to come?

A case in point should be India's Mahendra Singh Dhoni's innings in practice match against Bangladesh or David Warner's match winning 89 not out against Bangladesh in match four. Both the batsmen, despite having a reputation for hitting, decided to buy their time and chew some balls for their teams good. The result: Match winning knocks and memorable innings for fans. Of course, experts will point out how potent the short ball has proved so far (out of 42 wickets fallen in four games so far, 21 have been on short pitch deliveries), but again, hanging on the pitch despite hostile bowling is another skill required in 50 overs cricket. Hope teams learn that fans want to see a 100 overs match and not a bit longer version of a T20 onslaught encounter.

(The above story first appeared on LatestLY on Jun 02, 2019 04:06 AM IST. For more news and updates on politics, world, sports, entertainment and lifestyle, log on to our website latestly.com).