As the 2011 Cricket World Cup completed ten years, the International Cricket Council (ICC) celebrated the occasion with a special post. Taking to Instagram, the apex cricket council shared a morphed picture of MS Dhoni and Lasith Malinga, which left the fans in splits. 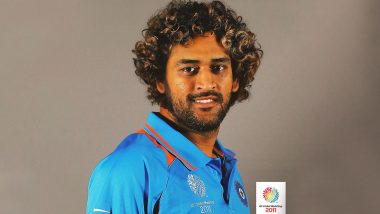 It has been ten years since the ICC Cricket World Cup 2011 took place, but the gala tournament is still fresh in fans’ mind. From Ireland’s historic win over England to MS Dhoni’s six off Nuwan Kulasekara to take India to glory, there are countless everlasting memories from the 10th edition of the 50-Over World Cup. As the blockbuster tournament completed ten years, the International Cricket Council (ICC) celebrated the occasion with a special post. Taking to Instagram, the apex cricket council shared a morphed picture of MS Dhoni and Lasith Malinga, which left the fans in splits. ‘Monk’ MS Dhoni Tells a Tale of Rohit Sharma’s Greediness in Star Sports’ New IPL 2021 Ad.

“Dipping yorkers. Slip catches. Helicopter shots. He can do it all...Presenting MS Malinga. #CWC11Rewind,” ICC wrote while sharing the hilarious picture. Unsurprisingly, the comment section got flooded in no time as netizens couldn’t control their laughter. Both Malinga and Dhoni had a memorable World Cup in 2011. While the Sri Lankan pacer scalped 13 wickets in seven games, the then Indian captain played a match-winning 91-run knock in the finals against Sri Lanka to guide the Men in Blue to the title. ICC Revisits Herschelle Gibbs’ Six Sixes Against Netherlands.

As it has been a decade since the showpiece tournament took place, a lot has been changed in the cricket world. MS Dhoni announced his retirement last year, and his blitzes will only be seen in the Indian Premier League (IPL), where he represents Chennai Super Kings (CSK). On the other hand, Lasith Malinga will now only be seen in T20 Internationals. He’s all but likely to retire from all forms of cricket after the T20 World Cup later this year in India.

(The above story first appeared on LatestLY on Mar 16, 2021 06:45 PM IST. For more news and updates on politics, world, sports, entertainment and lifestyle, log on to our website latestly.com).