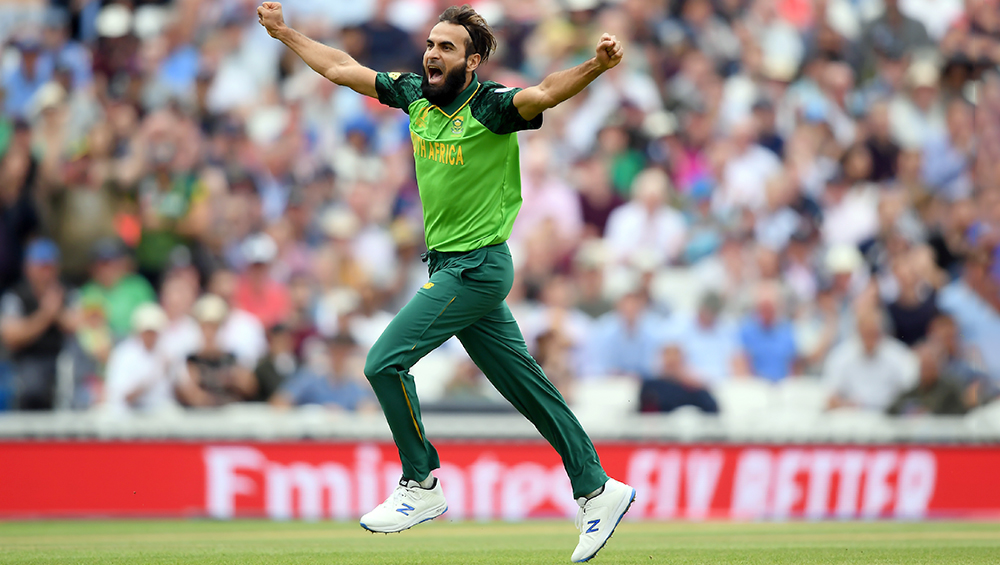 Arguably the best spinner to have played for South Africa, Imran Tahir celebrates his 41st birthday on March 27, 2020 (Friday). The leg-spinner has a bucket of variations in his arsenal and his record in international cricket is nothing but sensational. Be it breaking a partnership in the middle overs or taking wickets at the death, Tahir delivered whenever was entrusted with the ball. While, his bowling style is certainly iconic and so are his celebrations in which he tends to run all over the field like a lightning. Imran Tahir Becomes the First Spinner to Bowl the First Over of a World Cup During CWC 2019.

Hailing from Lahore, Pakistan, the leg-spinner played for Pakistan Under-19 Team before moving to South Africa amid lack of opportunities. Tahir made his ODI debut during the 2011 World Cup and since then, there was no looking back for the cricketer. He bowled one spectacular spell after another and proved his mettle all over the world. He, in fact, reached the landmark of 100 ODI wickets in his 58th match, becoming the fastest South African bowler to achieve the feat. Meanwhile, let's look at five times when Tahir destroyed the opposition batting line-up.

6/24 Against Zimbabwe in Bloemfontein

South Africa were bundled for mere 198 runs in 2nd encounter of three-match ODI series against Zimbabwe in 2018. Well, a great upset was set on the cards but Tahir had different ideas. The leggie spun his web around the visiting batsmen and took wickets in regular intervals. He went on scalp his 3rd five-wicket hauls in ODIs as Zimbabwe were packed for just 78 runs, losing the match by 120 runs.

7/45 Against West Indies in Basseterre

Tahir unleashed an absolute carnage against West Indies in the 2016 tri-series. On a pitch where the Proteas batsmen piled up 343 runs while batting first, the Caribbean batsmen put their guards down in front of Tahir's magical spell and lost the game by 139 runs. The leg-spinner's figures read 7/45 which are best for a Proteas bowler to date in ODIs.

5/23 Against Zimbabwe in East London

The talismanic leg-spinner was certainly at his prime during Zimbabwe's 2018 Tour of South Africa. One of best spells in that series came in the first T20I match. Chasing a target of 161 runs, the visiting batsmen were dented by Tahir's vicious deliveries and lost wickets in regular intervals. As a result, the Hamilton Masakadza-led side were bundled out for mere 126 runs and lost the match by 34 runs.

5/24 Against New Zealand in Auckland

Another Imran Tahir special was witnessed during the only T20I match of South Africa's 2018 Tour of New Zealand. Batting first, the Proteas side piled up 185 runs and the pitch looked ideal for batting. However, that wasn't the case when the home side came out to bat. Tahir was introduced into in the middle overs and since then, it was a one-man show. The veteran scalped a five-fer as the Black Caps were packed for 107 runs. South Africa won the clash by 78 runs and Tahir was adjudged Man of the Match.

4/12 Against Delhi Capitals in Chennai

Representing Chennai Super Kings (CSK) in IPL 2019, the veteran enjoyed a dream run and also ended up as the highest wicket-taker in the tournament. His best spell, however, in the tournament came against Delhi Capitals. Defending 180 runs, Tahir scalped the wickets of Rishabh Pant and Axar Patel, running through the opposition's batting line-up. The Shreyas Iyer-led side eventually got bundled out for 99 runs and lost the game by 80 runs.

Imran Tahir bidded adieu to ODI cricket after the 2019 World Cup but continued to showcase his blitzes in the shortest of the game. He was expected to represent CSK again in IPL 2020. However, the gala T20 tournament is get called off amid the coronavirus scare.