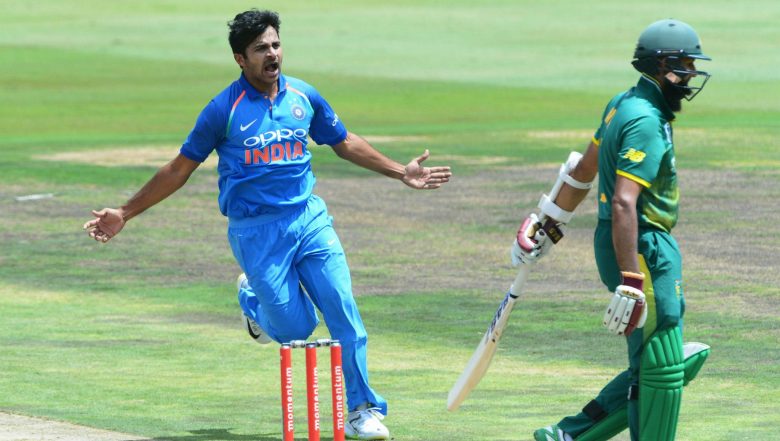 Thiruvananthapuram, September 12: An all-round effort from India A saw them clinch a comfortable seven wicket win A over South Africa A in the first unofficial Test at the Greenfield International Stadium here on Thursday. Chasing a meagre 48-run target on the fourth and final day, the hosts went through some hiccups and lost three wickets. However, opener Ricky Bhui's unbeaten 20 runs were enough to help India cross the line. India vs South Africa 2019 Schedule for Free PDF Download Online: Full Timetable of Ind vs Sa Fixtures With Match Timings and Venue Details.

Earlier in the day, India A bundled out their opponents at 186 runs as the visitors could only manage to add seven runs to their overnight score. Leg-spinner Shahbaz Nadeem was the pick of the bowlers for India A as he scalped three for 21 runs while pacer Shardul Thakur and Jalaj Saxena picked two wickets apiece.

Heinrich Klaasen was the top scorer for South Africa A in their second innings with his 48-run knock while Zubayr Hamza and Wiaan Mulder also contributed with 44 and 46 runs respectively. Kagiso Rabada Excited as South African Players Land in New Delhi for T20I Series Against India.

Opting to bowl, India had wrapped up the visitors at 164 runs in their first innings before replying back with 303 runs, thanks to Shubman Gill and Jalaj Saxena's 90 and 61 run knock respectively.