South Africa, after dominating the first two ODIs, would want to cap off a successful series victory with a clean sweep. India on the other hand, would have pride to play for in Cape Town as KL Rahul looks to register his first victory as ODI captain. 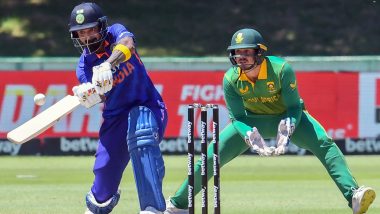 Action during the second ODI in Paarl (Photo credit: Twitter)

India may have already lost the series but they would be solely playing for pride when they face hosts South Africa in the third and final ODI of the series on Sunday, January 23. The match would be played in Newlands, Cape Town. The hosts have been ruthless and clinical in both games in the series, played at the Boland Park in Paarl. Skipper Temba Bavuma has led from the front with not just good batting but very intelligent bowling changes and his team has not let him down. After his and Rassie van der Dussen's hundreds in the first match flattened India, the visitors showed some promise in the second ODI with skipper KL Rahul and Rishabh Pant at the crease. But once their partnership was broken, South Africa bowlers found a way to make a comeback and they did, restricting India to 287/6 and then chased it down with seven wickets and 11 balls remaining. Virat Kohli’s Dancing Reaction to Rishabh Pant’s Innings During India vs South Africa 2nd ODI 2022 Goes Viral (Watch Video)

Rahul's side would aim to avoid a whitewash at all costs in Cape Town, the same venue where they had lost the Test series decider. There can be some expected changes in the Indian line-up with players like Deepak Chahar, Suryakumar Yadav and Ruturaj Gaikwad given a nod. South Africa meanwhile are likely to retain their winning combination from the second ODI unless there's an injury concern. India vs South Africa 2nd ODI 2022 Highlights

India and South Africa have played 86 ODIs against each other. South Africa lead the head-to-head record with 48 wins. India have 35 victories. The other matches did not produce any result.

For India, Shardul Thakur and skipper KL Rahul would be the players to watch out for. Thakur has been in fine form in both the games and is expected to maintain his form in the final game of the tour. Skipper Rahul on the other, showed signs of his class with the willow in the second one and would be eager on having a big score under his belt. South Africa on the other hand, would have their reliable skipper Temba Bavuma as one of their key players for the third ODI. Alongside Bavuma, the hosts would also look at Quinton de Kock as a key asset, given his Man of the Match performance with the bat and gloves in the second match.

Virat Kohli vs Lungi Ngidi is a battle to watch out for in the third game while the contest between Quinton de Kock and Jasprit Bumrah can also be a deciding factor when it comes to the outcome of the third ODI.

The third ODI between India and South Africa would be played at Newlands in Cape Town on Sunday, January 23. The match is set to begin at 2:00 pm IST (Indian Standard Time). This was the same venue where the Test series decider was played.

Live telecast for India vs South Africa 3rd ODI match will be available on Star Sports channels as Star Network holds the broadcast rights for India tour of South Africa 2021-22. The game will be telecast live on various Star Sports channels in multiple languages including Tamil, Telugu and Kannada apart from English and Hindi. Disney+Hotstar will also be live streaming the game online for fans in India. Fans can watch the live streaming of IND vs SA 3rd ODI on Hotstar app as well as on the official website. DD Sports will also bring the live telecast of IND vs SA 3rd  ODI 2022.

(The above story first appeared on LatestLY on Jan 22, 2022 12:53 PM IST. For more news and updates on politics, world, sports, entertainment and lifestyle, log on to our website latestly.com).