Inzamam Ul Haq Baffled With New Zealand Players Pulling Out of the Series Against Pakistan to Play in IPL 2021, Says ‘Is ICC Sleeping?’ 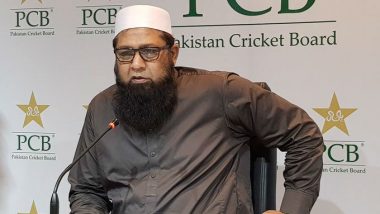 Inzamam Ul Haq is mighty pissed with the ICC as seven New Zealand players have withdrawn from the series against Pakistan to play the IPL 2021. He has slammed the players for pulling out on the series against Pakistan. Kiwi skipper Kane Williamson and Trent Boult are the ones who will be playing the remaining matches of the IPL 2021. Kyle Jamieson, Lockie Ferguson, Jimmy Neesham, Mitchell Santner and Tim Seifert are the other players who have been released by New Zealand Cricket Board. Tom Latham will be leading NZ in both series. This hasn't gone down well with Inzamam Ul Haq. IPL 2021 New Schedule For Free PDF Download Online: Time Table With Date & Match Time In IST, Venue Details, Fixtures of Rescheduled Indian Premier League 14 in UAE.

While speaking on his YouTube channel, the former Pakistani skipper slammed the ICC and asked if the cricketing body was sleeping?  He also said that the players should give more importance to the national team and not the private leagues. Inzamam also said that earlier this year when the Pakistani team travelled to South Africa, many players had pulled out of the team due to the IPL and history has repeated itself again. "What message are they (ICC) trying to give? Players are giving importance to private leagues and not international cricket. It’s like degrading international cricket. If you see the whole sequence, it’s happening only against Pakistan,” he said while talking about the ICC.

The remaining season of the IPL 2021 will be held on September 19, 2021. The megaevent will happen in UAE. The fans are waiting eagerly for the IPL 2021 to begin soon. Pakistan will play three-match ODI series against New Zealand and will also be playing five T20 games. The first ODI between Pakistan and New Zealand begins on September 17, 2021.

(The above story first appeared on LatestLY on Aug 11, 2021 10:19 AM IST. For more news and updates on politics, world, sports, entertainment and lifestyle, log on to our website latestly.com).