IPL 2018 Playoffs: These Teams Look Favourites to Take the top Four Spots on the Points Table

Here's a list of team who are most likely to make it to IPL 2018 playoffs. 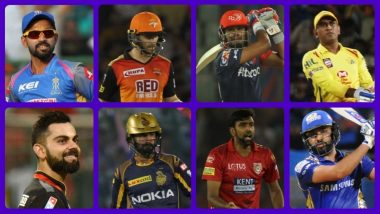 We are halfway through to the Indian Premier League 2018 (IPL 2018) and the race for a place in the playoffs is heating up. All eight teams have till now played seven or more matches. A look at IPL 2018 points table gives a good indication of how teams currently stack up. However, there is a considerable time left in the tournament and it doesn’t take long for a team to turn the tables around. It is safe to say, all is not lost for the teams like Delhi Daredevils (DD) or defending champions Mumbai Indians (MI), who presently are placed seventh and eighth on the points table respectively.

Currently, Chennai Super Kings (CSK), Sunrisers Hyderabad (SRH), Kings XI Punjab (KXIP) and Kolkata Knight Riders (KKR) have occupied the top four places on the team standings. Out of these teams, only KXIP have played seven matches while rest have featured in eight contests. Meanwhile, Royal Challengers Bangalore (RCB), Rajasthan Royals (RR), MI and DD are stationed on the bottom half of the points table.

It is pertinent to mention that form plays a crucial role in determining who makes it to the last four. CSK, SRH, and KXIP look in top form while KKR are inconsistent. RCB with their narrow win over MI the other night could well find the much-needed winning momentum. Even the defending champions, who are known as late bloomers, can stun all to climb up the ladder. RR too have it in them to bounce back. And, DD can as well pick their campaign up. Though the door is open for all teams to make it to playoffs, there are always favourites. So, here we pick the four teams who are most likely to make it to the next stage of the IPL 2018:

The MS Dhoni-led side have won six out of eight matches and occupy the numero uno spot on the points table. Given the form Men in Yellow are in, they have a good chance of advancing to the next stage. In their remaining matches, CSK takes on KKR, RCB, RR, SRH, DD, and KXIP. Out of these teams, CSK this season has only lost to KXIP (with MI being the other team). So, if the recent form is anything to go by, Super Kings look almost certain for a place in the playoffs.

Just like CSK, SRH too have won six out of eight matches. Despite losing their regular captain David Warner, the team has done well under Kane Williamson. In their remaining matches, SRH faces struggling DD and RCB twice apart from CSK and KKR. Even if Sunrisers lose a couple of matches, they still will have a good chance of qualifying for the next round, thanks to their earlier wins.

With five wins from seven matches, KXIP also look good for a place in the playoffs. However, the Ravi Ashwin-led side needs to be wary of any slip-up. They are yet to face RR and defending champions MI this season and you never know what kind of challenge these two teams throw at the Punjabi boys. A good start to the season is key to any team’s success and going with that mantra, KXIP will find it relatively easier to advance to playoffs than some of the bottom-placed teams.

Not many, at this point in time, would like to place their bet on RCB. But the Virat Kohli-led team isn’t in that bad position. RCB have three wins from eight matches in their kitty and especially after their narrow win over Mumbai they can turn the tide in their favour now. They face strong teams like CSK, SRH, and KXIP in their remaining fixtures. But that’s when you expect a team led by Kohli to thrive. He loves challenges and does overcome them. It’s time for him to show that in the IPL as well.

(The above story first appeared on LatestLY on May 02, 2018 06:23 PM IST. For more news and updates on politics, world, sports, entertainment and lifestyle, log on to our website latestly.com).